Over at the ProToolReviews site, we’ve been looking at 25′ tape measures for the last few weeks. We had 8 models from top manufacturers to look at, so why not put them up against each other in a tape measure shootout? Naturally, that was the direction we took. When determining a winner for our in-house contest, we looked at a number of factors. Accuracy, durability, ergonomics, throw and standout, hook design, feature sets, and value all factored into the decision making process.

By the end, we could confidently pick out a winner, but that isn’t to say that the competition wasn’t close, or that the other tape measures don’t have their merits. In fact, one of the stronger contenders in the “value” category comes from a company known for its levels. The compact and lightweight 500AL-25 Empire Tape Measure brings an incredible value to the world of measurement with its auto-locking feature, its nylon coated blade, and its fractional markings. And, unlike most of the tape measures we looked at, this one retails for right under $10.

Build Your Empire…With An Empire

Autolocking seems to get left off of a lot of pro model tape measures, and while everyone will have their preference, we kinda wonder why that’s the case. Instead of having to push down a thumb lock to keep the blade extended, the tape measure automatically locks the blade into place. When it comes time to retract the tape, you just push the button, and the blade releases and rewinds itself. It’s a feature that might not make a world of difference for most applications, but we find it a handy feature if we can get it. Fortunately, the Empire Tape Measure includes it. Empire also uses a white background with black printing on the blade. Although the improvement from black on yellow is marginal, we do find that the contrast does help with visibility. We also found the fractional markings helpful; again, this feature gets left off of a lot of tape measures, and we appreciate the inclusion here. The blade also features a nylon coating for increased durability and a smoother action. For a closer look at the 500AL-25 Empire Tape Measure, check out the full review on ProToolReviews.com. This Empire Tape Measure makes for a pretty feature-rich, budget-friendly model. Of course, there are tape measures with better form factors, hook and clip designs, feature sets, and durability. But none of them retail for what the Empire model does, and to be fair, the Empire Model is probably more than adequate in most of these areas anyway. If you’re in the market for a basic tape measure that has some solid features, do yourself a favor and check out the AL500-25. 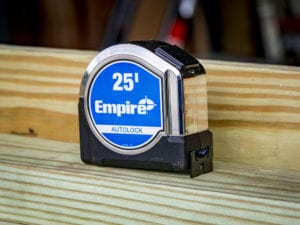 For more information about the Empire Tape Measure, visit EmpireLevel.com.