Working around compressors my whole life, I’ve learned to deal with the loud and irritating sound of typical reciprocating (piston) compressors. What a dream and joy it is to stand near an Ingersoll Rand Rotary Compressor installation and still have a normal conversation. In addition to a quieter experience, the Ingersoll Rand R-Series rotary compressor delivers additional performance as well. 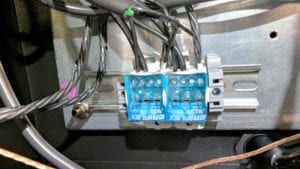 The R-Series line is available in single or 3-phase power, 208V, 230V or 460V. We ordered and received the R4i compressor configured for 230V single-phase power. After installing a 50A breaker in the panel, we ran 8 AWG 8-3 wire from the panel to the compressor in seal-tite flexible conduit. We wired up 2 legs (wires) of power to L1 and L2 inside the door of the Ingersoll Rand R-series compressor, hence attaching the ground wire to the ground lug. Wiring is made very simple with the labels from Ingersoll Rand, although we still recommend a licensed electrician to complete this task.

With wiring complete, it’s time to fire up the compressor for the first time. Hit (touch) the green button, and the Ingersoll Rand R4i roars to life – more like humms to life. You first hear the whisper of the Total Air System drier and fan kick on, then the compressor comes on. Even with the unit fully running, engaging in conversation nearby is not uncomfortable. 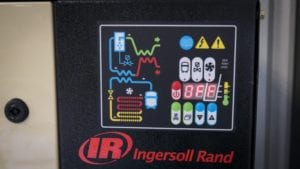 In addition to the rotary compressor, Ingersoll Rand added the Total Air System (TAS – sounds like TAZ). This adds a refrigerated drier, conditioner, and filter. This ensures clean exit air for painting, sanding, and any uses for clean compressed air. We will have additional posts and videos to follow, including air line install, the actual review, and more. Stay tuned on Instagram, Facebook and Twitter.

How To Use An Air Compressor