This new Ingersoll Rand 2850MAX 1-inch impact is lighter and more powerful than the other 1-inch impacts on the market. 3-speeds forward and 3-speeds reverse.

When it comes to working on heavy equipment, you can’t afford to skimp on tools. Not only do labor hours add up for heavy equipment mechanics, but companies lose a lot of money and time when equipment is down. Probably the most important tools in our toolbox are the impact wrenches. I recently had the chance to switch to the new Ingersoll Rand 2850MAX 1-inch impact wrench.

In all honesty, I wasn’t expecting a whole lot. In the past, I loved the IR 1/2″ and 3/4″ impacts, however, the past 1-inch IR impacts left a little different taste in my mouth. The old IR guns like to break internals and tend to not have the power that I desire.

After almost two months of heavy use, I’ve gained tremendous respect for the new Ingersoll Rand 2850MAX 1-inch impact. Power is way up, and we can’t seem to break it. Due to our previous experience, we made sure to push the limits on this new IR impact gun. When it comes to 1-inch impacts, my go-to has been a different brand, but this new 2850MAX impact changed my mind.

Editor’s Note: This article was originally published on June 7, 2018. Pneumatic input on the Ingersoll Rand 2850MAX is a female thread 1/2″ NPT. The air input actually swivels 360-degrees, which is a great added feature. The 2850MAX actually comes in two variations. You can get the 2850MAX, which includes a 1-inch square anvil on the front. The version that I opted for is the Ingersoll Rand 2850MAX-6, hence it includes a 6-inch extended anvil. This extended anvil provides much better access to areas like lugnuts in wheels. The auxiliary handle, or the get-some-leverage handle, allows the user to adjust the position to their liking. This also rotates 360-degrees, until the nut is tightened to clamp into place. Speaking of handles, Ingersoll Rand does a great job with chemical-resistant rubber overmolds, performing even in tough environments. This overmold helps in grasping the primary handle and pulling the trigger, even in slippery situations.

One of the most profound features on the 2850MAX is the weight or lack of. At less than 20-pounds, this Ingersoll Rand 2850MAX is 25% lighter than the industry leader. The most notable feature is the monster power this 2850MAX delivers. A solid steel impact mechanism pounds out 2,100 ft-lbs of torque in reverse. Foward motion, tightening, will still get you 2,000 ft-lbs of pneumatic impact love. Users have the option to choose from 3 forward-speeds and 3 reverse-speeds. Power output fluctuates along with each speed, hence a slower speed delivers less power. 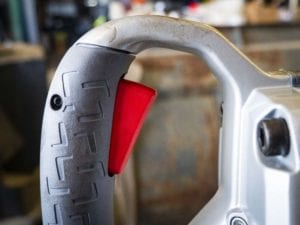 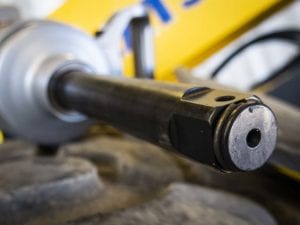 The max free-spinning RPM is 5,500, but this drastically decreases under load. The more important number is BPM, to which Ingersoll Rand advertises as 770. This is how many blows per minute the Ingersoll Rand 250MAX delivers to the fastener. Finally, hearing protection is recommended, since this tool runs about 96.7 dB(A) when under load. Along with the aforementioned solid-steel impact mechanism, the cast aluminum housing is built to stand-up to the normal drops and kicks. We noticed an area where weight is saved is on the anvil. Compared to other 1-inch impacts, this anvil is turned down a bit more, or made from smaller stock. During our many hours of reviewing/testing, we paid special attention to the anvil. We were expecting to see some wear or even destruction in this area. The anvil has held up great, and we keep the gun in the highest speed/power setting.

If first impressions are any indication, in this case, they are, this Ingersoll Rand 2850MAX 1-inch impact will be a great performer. When Shop Tool Reviews brought this over to my shop, they wanted to get a couple initial photos and video. I threw on a hose fitting and connected it so my truck-mounted compressor. One of our Komatsu loaders happened to be in one of the bays, so I lowered the bucket, raising the front wheels off the ground.

In what seemed like a few seconds, I’d zipped off most of the lugnuts. Thinking nothing of it, of course, I had the power/speed set on the highest setting, I zipped the lugnuts back on. Out of the 8-or-so that I took off, I broke 2 studs putting them back on. I was just used to holding the trigger down for a few seconds once the impacts started. It was a quick realization that this Ingersoll Rand 2850MAX has a lot more guts than what I was used to using.

This IR impact is a bit stealth, especially when you’re holding it. The lightweight feel makes you think it could be less powerful than it really is. Trust me, this is a welcomed issue. Anytime you can drop ounces…and pounds…from tools you use all the time, it’s a great thing.

Working on heavy equipment, power is everything. In other words, if your impact wrench doesn’t have the…guts…to remove the fasteners, you’re not getting any work done. After power, then we can discuss other items. The Ingersoll Rand 2850MAX definitely delivers on power, and it’s great that IR can do it with less weight. We’re happy to see that the old durability issues seem to be remedied with the 2850MAX. In addition to the power and weight advantage, we’ve also noticed less air consumption. It seems that the Ingersoll Rand 2850MAX is more efficient with the air that it does consume. Furthermore, with the less air consumption and added power, the 2850MAX performs quieter than the competition.

If you’re in the market for a new 1-inch impact wrench, you definitely need to give the Ingersoll Rand 2850MAX a hard look. I can’t think of a reason that I wouldn’t recommend this new IR impact wrench. Of course, the price is always a concern, but it’s priced competitively with the competition.

He knows every road in Central Florida like the back of his hand, and it's rumored that he was born with a wrench in his hand. John has decades of experience in the heavy equipment and construction industry. He very well could be, the most interesting man in the world.