The Fender Lizard brake bleeder eliminates the need to put a second body in the driver’s seat while bleeding brakes. Sure, there are other ways to do brake jobs, but many still prefer the old pump method. This simple tool can be used in most vehicles by the simple press of the button on the remote. It does require air pressure and a 12V source. 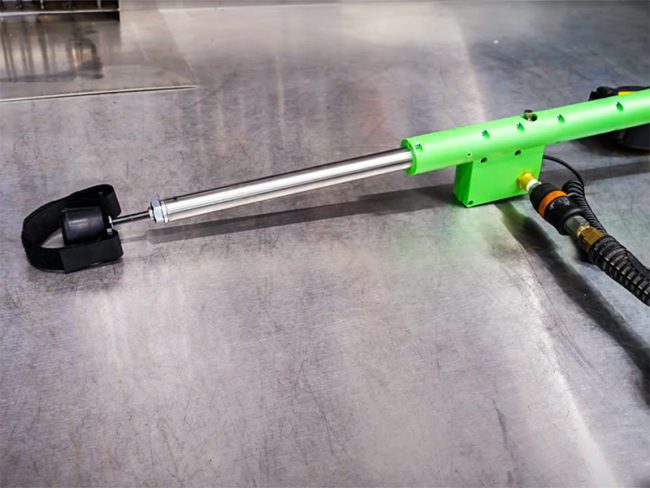 You may have seen a glimpse of the Fender Lizard in our SEMA Show 2021 Coverage.

What is a Fender Lizard?

One of my first questions to the founder of this tool was just that: what is a Fender Lizard? I was sure there was a logical explanation and/or a personification of the title. My assumptions confirmed it’s that person that leans on the fender, running their mouth while you’re doing all the work. Pretty good name if you ask us.

Now, in terms of the Fender Lizard tool or brake bleeder, that’s a different story. This is a simple pneumatic cylinder that gets pressurized by air, or an air compressor. With the press of the single button on the remote, the pneumatic cylinder extends, pressing on the brake pedal. Loosen the bleeder screw at the caliper/cylinder and bleed the fluid. After closing the bleeder screw, another press of the button retracts the cylinder, ready for another cycle.

There are many tools and processes for bleeding brakes, and we would be here for eternity arguing over the “best” process. Bottom line, many technicians and mechanics still like to use the brake pedal pump method to bleed brakes. The Fender Lizard does make this process rather easy, and without the yelling and screaming at your kids or coworker. Just think of the tempers saved. Some may scoff at the $200 price tag while others may see this as a deal. We think it’s a great idea. What are your thoughts?