What is Shellac – You Won’t Believe It I was a soccer player in high school and college, and while we took our share of shellackings from higher ranked teams or squads from superior divisions, we were generally on the giving end. Even Calvin and Leah, my 7 year old twins, know what a shellacking is – it’s the we’ve used to describe some of the violent summertime thunderstorms we get here in Central Florida. So imagine my surprise when I got an email from Rockler letting me know that they had Shellac back in stock. It opened up a process and material that I honestly hadn’t know existed before. Whites shellac you ask? It’s amazing.

Back in the day, we made a wooden serving dish that we coated in a heavy, clear coating, something like varnish, to create at impenetrable protective layer to make the dish last for years. The problem was that even at 40x the viscosity of normal varnish, it still took three coats to get the thickness of what we were after. I remember wondering if this was the process they had to use to do the nice high gloss coatings on coffee tables and other furniture that shared that finish. It seemed so time consuming and redundant (granted, I was maybe 12 at the time).

Enter shellacking – the process of dissolving shellac flakes into solution so it can be brushed or sprayed on to created that beautiful high gloss coating. A couple of reasons that it is such a popular finish (in addition to its inherent appearance) is that it is easily repairable and non-toxic. In fact, shellac is used to create the coating on some pills to make them easy to swallow and as a confectioners glaze on candy. I wouldn’t try licking your coffee table though, your wife might give a strange look.

Shellac, available in flake form from Rockler, is actually starts as a protective coating secreted by an insect – the lac bug (Lacccifer lacca). The lac bug infests certain trees in India and Thailand. The coated branches are harvested, and the coating (called seedlac) is chipped off. The raw seedlac contains natural dyes, some of which come out during processing, but some remains, giving the shellac its characteristic colors. The color varies based on the type of tree it was produced on, the geographical area, and even the time of year that it is harvested.

Raw seedlac contains some impurities like wax, bark, twig wood, and even leftover insects (remember the mosquitoes from Jurassic Park?). The seedlac is melted or dissolved in alcohol then strained to remove those impurities. A filtration process can then be utilized to lighten the resin or remove the wax. The purified resin can then be dripped on to sheets as “buttons”, or rolled/stretched into sheets, cooled, and then broken into flakes. 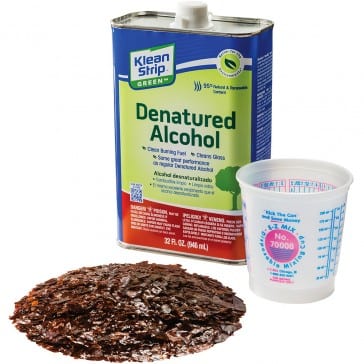 The now ready for use shellac is dissolved into a solution with mineral spirits by the end user and brushed or sprayed on to the surface he or she would like to protect. The wax-free shellac coating is great for sealing stains, odors, and knots. It can be used underneath other finishes as well. In recent years, shellac had been tough to get and increasingly expensive due to drier than normal conditions in the region the seedlac is harvested. Currently, more normal rain patterns have returned and the supply of shellac has made a comeback as a result.

Many thanks to the folks at Rockler for providing information on the shellac production process for this article. For more information on Rockler woodworking products, please visit their website.