I’ve got two corded orbital sanders, which is in itself a story. My Porter-Cable is about 10-12 years old, and I’ve repaired and rebuilt that thing over and over again throughout the years. About 8-9 years ago I somehow misplaced it in the Jeep “war wagon” I used to drive around to get from job to job doing my trim carpentry work. In my defense, the back of the Jeep was filled with everything I could get within reach of the tailgate. Since I really needed an orbital sander on a particular job site, I broke down and picked up a DeWalt. Since then, I’ve easily put 150-200 hours on that tool. I eventually cleaned out the Jeep to sell it…which is when I found my missing Porter-Cable! Today, I’m still using both for most of the work I do.

When I got ahold of the Makita 18V orbital sander, I wondered how to best use this 18V tool in my carpentry work. This is a newer tool from Makita, and it makes a lot of big claims, such as 40 minutes of run-time in the low speed setting. I happened to have a couple jobs where I could test the tool out properly to see if it could hold up to the work for which I normally pulled out my corded models. The first opportunity I had was on a job where I needed to shape a piece of wood to fill a 7/16″ gap on a built-in. I rough-cut a piece of poplar and was able to literally pull out the Makita and sit there on the bumper of my truck and finish it to a perfect fit. This was shaping up to be a great start. 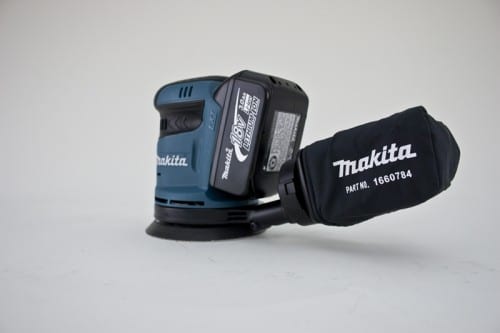 When using the Makita 18V orbital sander, the first thing I noticed was that it was so much quieter than my other corded orbitals. I love where they put the battery, vertically just behind the handle. You can grab it from the front or the top, but in both positions the weight seems balanced, and though it’s a little butt-heavy, it’s not awkward so that you have trouble getting it into tight spots.

I also liked how you could set it down on the table and give it a 360º spin with just the flick of a finger. It has excellent bearings and a super-smooth action that my corded sanders certainly don’t have anymore—if they ever even did. Dust collection seemed pretty good, though that’s not something I run into a lot with my work, since I fab most of my pieces outside the homes I’m working in. Without a vac, and particularly if you’re using a 220 grit or finer paper as I’m apt to do in order to remove the shine off flooring repairs and such, 100% dust containment is near impossible.

My older sanders don’t have rheostat speed control, so a three-speed switch on an orbital is new to me, though,I know some of the newer corded models have dials to control the speed. For the Makita, the speed control seems more like a battery-saving device than anything else. I always kept mine on the fastest speed (which comes on when you first hit the button), but you’ll get more run-time if you drop it down. I’m a fan of a straight rocker switch, but I like how they at least gave you a second button to turn the sander off. You don’t have to cycle it down with the same button. Unlike a speed dial, the Makita forgets where it was each time you start it up, so if you want to use it in low speed, you have to set it each time. The pad brake is actually quite good, and the orbital pad stops spinning in just a few seconds after turning off the tool. 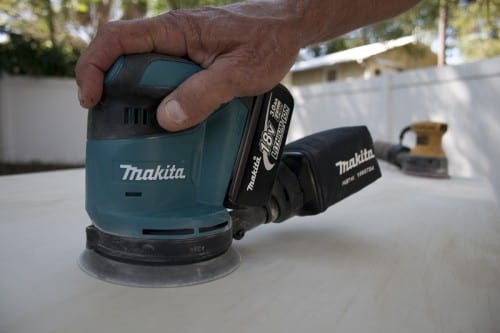 Battery life was pretty good. I found it to be somewhere in the vicinity of 20-25 minutes depending on what pad I was using and how hard I was pressing down on the sander. I don’t doubt Makita’s claim that you’d get 40 minutes in low-speed mode, but I don’t find that to be a common application for a tool like this. The bottom line is that it charges in just 30 minutes, so with the two 3.0 Ah batteries in the kit you could get nearly continuous run-time if you needed it.

One tool I’ve switched entirely to cordless is my drills. But for sanding and such, I tend to wonder if the advantages of cordless are going to be enough to overcome corded orbital models. My first impression is probably not. When you’re on a job site you typically have power runs for your chop saw or table saw, so running a corded orbital sander is certainly no big deal. The second thing to note is that using Makita’s 18V LXOB01 orbital sander means you’re dropping the speed down to around 80% of what you get with a corded model. It’s an apparent trade-off in order to manage the tool’s battery life. The up-side is that there’s also virtually no vibration either. Even when you put pressure on the tool, the Makita doesn’t get too much more in the way of vibration on the workpiece or on your hand. 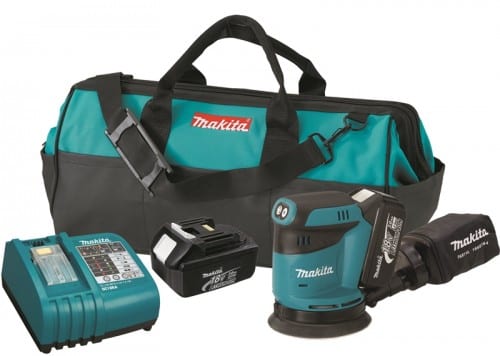 No Power on the Job Site? No Problem

Recently, I was doing some work at a mobile home rental in the north side of the city where I live, and the owner keeps the power off in-between renters. In fact, they even warehouse the AC units on these things in between leases in order to make sure nobody swings by and lifts them for scrap. In this particular mobile home I was touching up countertops, and having a tool like this with some 80 grit paper would have helped me smooth out the top surface before re-applying the formica. As it turns out, I had to use a manual rasping tool to take care of the high spots, which took a lot of elbow grease to prep the counters.

What It Boils Down To

In terms of convenience, a tradesman is going to have a hard time passing up this tool. But you’re also not going to want to use it on larger jobs where you could just as easily run power and grab a corded model with a lot more power. This is particularly true when you have to run power anyway for your saw, router or other equipment. If you’re trying to remove 1/32″ or 1/16″ on some materials or correct something that’s out of square (say you want to true something up), this is going to be a great tool for you. And obviously, if you’re prone to running into situations where getting adequate power is an issue, then the Makita can be a great tool to have in the arsenal.

I recently blew out, okay I think I cross threaded a screw when replacing the pad on my Porter Cable corded. And instead of just jumping into a purchase, I decided to take a look around … in other words read some reviews and such. This caught my eye because I am already on Makita’s 18V drill driver, but I have to say I was hoping for a little better of an overall take. The motto has always been “corded first, cordless second” and I see no reason to deviate from that here. Thank you. Great Review.