The Jackclamp is a unique animal from the minds at Lowell Thomas Tool that combines the function of a clamp system with a jack to provide a variety of uses. We’ll get into all of those momentarily, but first things first. When I took a look at the Jackclamp website (click here to see for yourself), two things immediately struck me. First, the folks that make this system are very proud that it is made in the USA. I like that…a lot. Second, they seem to firmly believe in the quality and usefulness of their tool and aren’t afraid to back in up for life. Again, something I really appreciate. I could get used to companies like these. But I digress, you’re here to read about the Jackclamp Bar Clamp!

What Does the Jackclamp Bar Clamp Actually Do?

You know, I’ll throw myself under the bus here and admit to being a fan of the Harry Potter movies. There’s a scene where Harry meets his best friend’s dad for the first time, who just happens to be fascinated by Muggles (non-magic folks). He very sincerely asks “What exactly is the function of a rubber duck?” Yep, clamping aside, that exactly what I wanted to know. What exactly is the function of a Jackclamp, or better yet, the entire Jackclamp system?

It clamps. Okay, we get that—but it doesn’t look like any traditional clamp on the market. That’s because it’s the only one out there that features both a parallel top bar and the ability to remove both bars from the adjustment handle. That is a small difference with massive implications.

The Jackclamp’s design also allows it to tackle the other part of its name—namely, jacking. According to the specifications, it can lift up to 300 pounds using the stand attachments. Using the same action with the spreader attachment allow you to spread, again with up to 300 pounds of applied force. The V-Jaw attachments allow you to clamp pipe or other irregularly shaped objects. While I’m not entirely sure how applicable most people will find it to be, it can also help you hoist up to 300 pounds. Sometimes, though, it’s not about actually doing something, it’s just knowing that you could that makes it cool. Another useful feature that will help out around the shop are the built in levels. 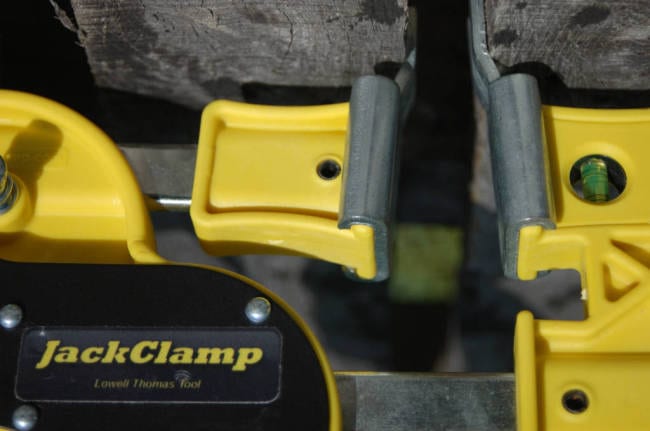 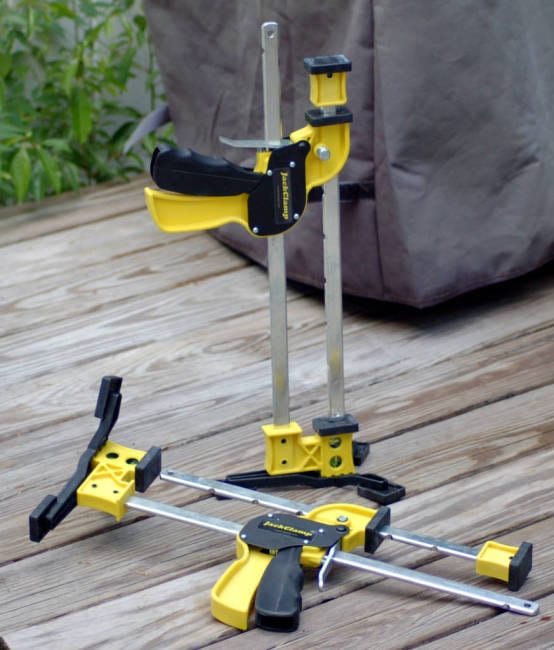 At the core of the Jackclamp System is, of course, the Jackclamp. It can be purchased on its own, but you’re really limited to the clamping feature. The accessories are what helps to really expand the possibilities. As described by the functions above, there are the V-Jaw, foot (to create a stand), spreader, and additional pad accessory packages that can be purchased.

You can save some money by purchasing packages that include part, or all, of the system. The Cabinet Jack Kit is offered with the Jackclamp and foot accessory. Multiply that by two, and you get the Cabinet Jack Double Kit. Then there’s the Jackclamp System Kit: two Jackclamps with foot attachments for both. It also includes the spreader, V-Jaw, and extra pad accessories. They’ll even toss in free shipping with the System Kit.

I was able to use the Jackclamp system in a variety of applications. For the jacking feature, I had it hoist an over-the-stove microwave I was installing—a superb example of how perfect a tool like this can turn a two-man job into a one-man job. I also used it to help install some wall cabinets, and for securing overhead tile. I had it fill a variety of standard material clamping functions as well.

One of the first things I noticed when I actually put these to use was how well made they are. The bars are substantial.  I initially did a visual comparison to my Irwin clamps, but when I saw how much more heavy duty the Jackclamps were, I actually measured them with some calipers. Those parallel bars are roughly 40% thicker than my other clamps, which results in a stronger jack or clamp. 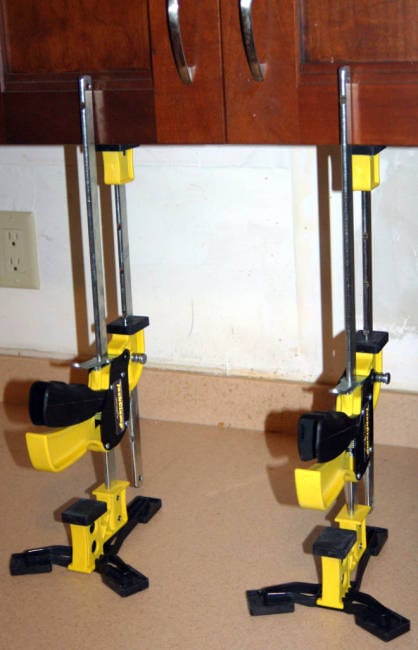 I work on my own about 98% of the time. The Jackclamps quickly became my extra set of hands. The ability to act as jack meant that I didn’t have to fool around with all kinds of shims and other ridiculous looking ways of holding materials up in lieu of an assistant. While there are plenty of clamps to choose from out there, the Jackclamp works extremely well in that capacity.

Making adjustments to the system was pleasantly simple. The pads can be exchanged for the V-Jaw or spreader attachments quite easily, but they are still quite stable under load. It’s also very easy to flip the bar to switch between jacking and clamping functions. A detent pin clicks solidly into place to hold the extension bar. One of the features I really appreciated was the ability to put the system together around the materials I was working with.

Here’s a video of the Jackclamp in action!

Normally, I would try to compare a tool to others in its class, but there isn’t anything else on the market like the Jackclamp. As a traditional bar clamp, it is one of the best that I own. As a jack, it’s fantastic for holding up cabinets and installing overhead tile. For the applications that I put it through, I couldn’t find a single complaint.

I highly recommend paying the $119.99 for the system. If you’re like me and tend to work alone, you’ll appreciate the second pair of hands that these provide. You’ll definitely want the set of two (at least) to benefit from all of the functionality. While you may not use the V-Jaw or Spreader attachments often, most general contractors and woodworkers will come across a need for them occasionally.

I found the Jackclamps to be well made, easy to use, easy to adjust, and easy to reconfigure. They are in my truck full-time and go with me to every job site. It is my opinion that the Jackclamp is one of the most innovative and functional products I’ve seen in the clamping world. Jackclamps make a bold claim to be the best bar clamps in the world…and I’d have to agree.

Jackclamp claims to be the best bar clamp in the world. It's built to be durable and functional. What it claims to do, it does very well. The only thing that is average is the price. While it is more expensive than a traditional bar clamp, it well worth the additional cost.

DeWalt Trigger Clamps: May the Force Be With You

Thanks for info: guys !!

Outstanding invention! Well worth the money.Bought mine at Canadian Home Hardware

This website uses cookies to improve your experience while you navigate through the website. Out of these cookies, the cookies that are categorized as necessary are stored on your browser as they are essential for the working of basic functionalities of the website. We also use third-party cookies that help us analyze and understand how you use this website. These cookies will be stored in your browser only with your consent. You also have the option to opt-out of these cookies. But opting out of some of these cookies may have an effect on your browsing experience.
Necessary Always Enabled
Necessary cookies are absolutely essential for the website to function properly. This category only includes cookies that ensures basic functionalities and security features of the website. These cookies do not store any personal information.
Non-necessary
Any cookies that may not be particularly necessary for the website to function and is used specifically to collect user personal data via analytics, ads, other embedded contents are termed as non-necessary cookies. It is mandatory to procure user consent prior to running these cookies on your website.
SAVE & ACCEPT
wpDiscuz
5
0
Would love your thoughts, please comment.x
()
x
| Reply