At this year’s Bosch Media Event the one tool that stood out the most was their new Axial Glide 12-inch Dual Bevel Miter Saw (GCM12SD). There is no question that it redefines the operational expectations of a miter saw. Right off the bat you could see that Bosch has basically created a Terminator-style machine that looked aggressive and raised the bar for how a miter saw should function. What’s more, they are releasing it at a $799 (street) price point approximates their existing top-of-the-line 12″ miter saw. That’s bold. 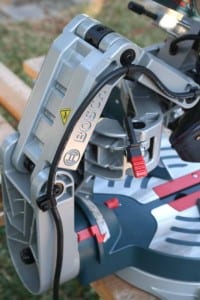 We got to use the Axial Glide Miter Saw extensively at Bosch’s US headquarters as well as in our own testing facility and one of the initial comments was how different it looked. Instead of dual slide rails to guide the saw forward and back, Bosch had integrated a two-axis multi-joint arm system that includes 12 sealed precision ball bearings. It’s very similar to the linkage used in a four-bar suspension design. The result? Unbelievably smooth travel and much better control over your cuts. Bosch has made a precision machine that is capable, in our opinion, as being labeled the first saw that can consistently handle 1/32″ accuracy every time. The new Axial Glide system in the GCM12SD doesn’t just provide a nifty new take on the sliding rail system, it obliterates it by providing a level of smoothness that has never been possible before. Given the sealed ball bearing construction, the other great thing is that it won’t degrade over time, and the robust nature of the cast aluminum arms means that even at extreme bevels the system retains its perfectly smooth action. To add a bit of personal customization (after all, we’re talking about a lot of 50-year-old woodworkers here, Bosch even integrated a “glide damper” which enables users to ratchet down the glide action to increase resistance (so no one can complain that it’s “too smooth”). For us, we started the default mode where it could be moved forward and back, with perfectly smooth precision, with just one finger – even at a full bevel. Finding this a bit too smooth, we opted to dial it down a notch and the result was a stiffer action that was smooth, but not clumsy. 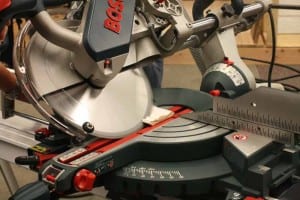 Let me reiterate – this miter saw is like no other you will use. Apart from the looks, the enclosed system means that it won’t degrade over time like a standard rail system which picks up dust and dirt and works it into the bearings and rollers. A year after you open it, the Axial Glide will still retain its perfect glide – and that’s what has us anxious to see this technology flourish. In addition to the GCM12SD having a very distinctive look and feel, the Axial-Glide system saves up to 12″ of workspace (compared to traditional slide rail systems) by folding its articulated arm flush with the back of the saw. This enables the saw to be operated with virtually zero clearance behind it. Think about how this would benefit using the saw in a cramped workshop, hallway or other enclosed area like a closet.

Possibly the most surprising spec on the new Axial Glide 12″ Miter Saw is that Bosch actually increased its cutting capacity over their existing 12-inch Dual-Bevel Slide Miter Saw. The GCM12SD provides 14″ of horizontal cutting capacity (an increase of 2″) and 6-1/2″ of maximum vertical cutting capacity against the fence (crown or base) – an increase of 1/2-inch over the former model. We would have expected some compromise to enable new technology, instead, Bosch made it even more capable.

Editor’s Note: For those of you looking for a Bosch 10-inch Axial Glide Miter saw, Bosch finally released one in 2014.

As with the Bosch 5312 and 4405 miter saws, they feature their Upfront Control system to  eliminate the need to reach your arm behind the saw to make bevel adjustments. All of the bevel lock lever and range selector controls are located right in front and are all-metal construction. Bosch also kept its easy-to-use Squarelock Quick-Release fence system. It certainly works, but it;s also very susceptible to becoming gummed up with sawdust and dirt, so expect to clean it frequently and keep it lubricated. They also made it extremely easy to attach sacrificial fences or jigs as needed. On each side of the saw base are built-in material supports that can be pulled out of the base and locked into position to offer additional material support when needed. 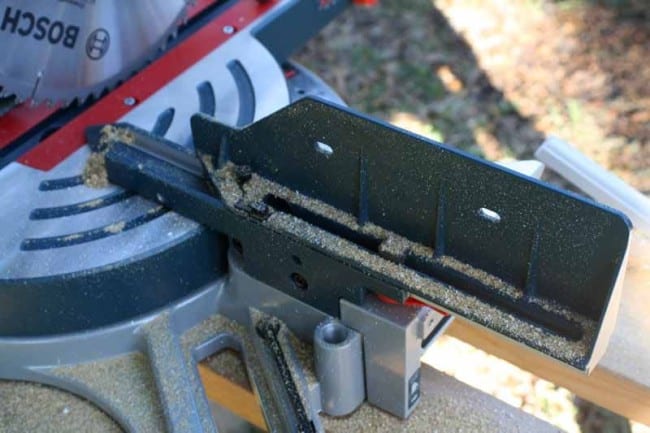 In a normal preview we’d be done now, but Bosch decided to add some more features to the Axial Glide Saw. We have yet to see this anywhere else, but they added two integrated sliding material supports that extend out from each side of the saw for a total extended length of 40″. According to the company, that’s a full 60 percent more left-to-right material support than the leading competitor – all without a separate stand. Their dual purpose dust port adapts, right out of the box  to standard 1-1/4″ (33 mm) vacuum hoses and offers up to 90% dust efficiency when cutting 2x material with an attached vacuum. We tried it out and the reduction in dust was remarkable.

In terms of flexible cutting and adjustments, the saw has an easy-to-read, etched stainless steel miter scale that aligns with 10 adjustable miter detents. That means that if you are compound-cutting a unique crown you can move the detents around for easy use throughout the saw’s entire 52-degree (left) and 60-degree (right) miter range. There is the expected miter detent override on the front of the saw which allows more precise adjustments at fractional measurements. A high-visibility scale allows users to adjust the front bevel angles from 0-47 degrees left or right and two 30-60 crown 33.9 degree bevel stops are built right in. 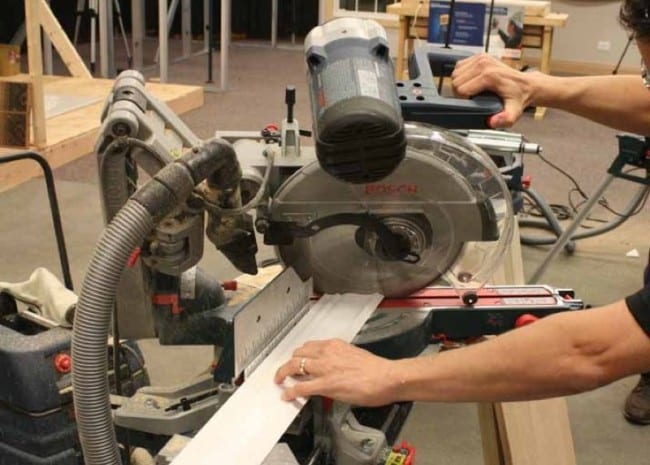 The handle and trigger are ambidextrous and Bosch has, unfortunately in our opinion, integrated thumb safety switches that must be pressed before the trigger will activate. These are OK for less expensive models, but we expect our top of the line to simply work, and a stronger trigger pull should be all the safety one would need. Still, we got used to it over time and it’s not much of a negative. Unlike some other yellow saws we’ve used in the past, Bosch opted for a completely clear lower guard which delivers unobstructed visibility throughout the cut. And speaking of cut, it does so with a power that is unstoppable and gobbles up all the juice it needs. We measured 8.8 amps of current being pulled through the saw under no load – a number that quickly ramped up to 11.4 amps when slicing through a pressure treated 2×4. The motor is powerful and handled larger cuts with no difficulty.

As with most sliding miter saws, the blade only just breaks the plane of the rear corner of the cut – likely due to maximizing its cutting depth capacities. If you intend to limit the depth of cut using the depth stop screw, you’ll need a fairly large standoff in front of the sliding fence to bring your wood further to the front and to center it under the lower crown of the blade. 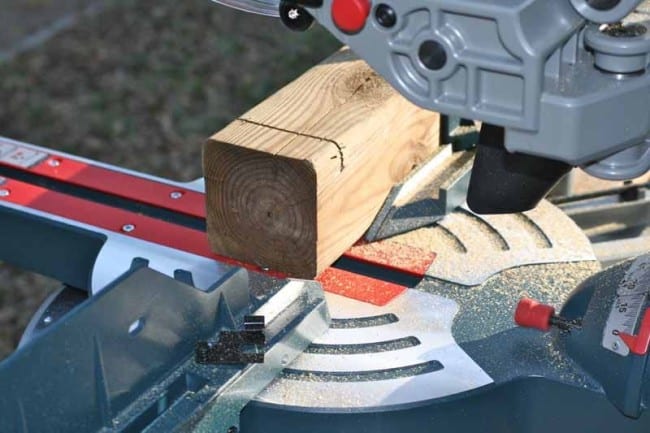 In terms of power, the saw comes with a full 3 horsepower (HP), 15 amp motor and provides 3,800 rpm. Nothing seems to stop the blade and we expect this is the last miter saw you’ll ever buy. The Bosch GCM12SD Glide Miter Saw doesn’t feature an integrated laser – unfortunate given the precision of the mechanism – they could rally have created the world’s first laser that actually worked consistently. Instead, it’s compatible with their LS010 Laser Washer Guide or any other universal aftermarket laser washer system. It can also be used with the optional accessory flip Crown Stops, as well as Bosch’s T4B Gravity Rise, T3B TracRac and T1B miter saw stands.

This miter saw is one of the first innovations that really captured our imaginations this year. We’ve never seen, or felt, anything like it. Its smooth, adjustable operation and exceptional cutting capacity make it a compelling product. Additionally, the fact that Bosch is pricing it equivalent to its existing top-of-the-line 12-inch miter saw, means that the company is going after the mainstream professional and attempting to redefine the industry’s expectations. With a reduced tool depth and the integrated sliding material supports, this saw only lacks an integrated cappuccino machine… and I think we can let them slide on that one. This is a tool that you have got to check out for yourself. We’d even go so far as to say that for $799, this could be the last miter saw you’ll ever buy.