OK, so this tool has been out for a while, but in case you’ve never seen it, we bring you the automatic track saw. Track saws are certainly nothing new, after all Festool has one that’s pretty amazing and even EurekaZone created a Smart Guide system that turns just about any circular saw into a track saw. But what got our eyes popping was the fact that Mafell’s solution was automatic. That’s right, you connect power and the (optional but highly recommended) dust extractor system and then press a button and the Mafell PSS 3100 SE automatic track saw goes to work. Since you’re at the start end of the cut and need to maintain pressure on the momentary rocker switch to keep power to the system, the tool actually looks remarkably safe. In fact, it includes an automatic riving knife that drops into place once the blade has reached its proper cutting depth.

Check out the rather long Mafell PSS 3100 SE automatic track saw video on the system here:

So the Mafell PSS 3100 SE automatic track saw is basically a self-propelled track saw that Mafell actually bills as a horizontal panel saw (makes sense). The saw and rail system can make cuts up to 122″ (3100mm, 3100 SE… get it?) and can go even longer if you add an additional follow-on fence. More importantly, however, this automatic track saw can be reduced in length for transport and for shorter cuts. It weighs about 37.5 lbs and includes the mounted circular saw and the two-sided rail system.

The track saw rail “adheres” to the cutting surface via foam plastic inserts, as opposed to clamping, and Mafell claims the rail won’t slip, even if you bump the workpiece. The Mafell automatic track saw is also variable speed, ranging from 2600-5200 RPMs. The cutting depth range is from 0 – 1.75″. The feed rate can be selected at the control panel and then you just press the button to get started. And the dust extraction is highly advanced, with the system plugging into the main control unit and the dust and debris being vacuumed out via the channel itself. When the cut is completed you can return the saw back to the starting point by pressing and holding the activator rocker switch in the opposite direction. 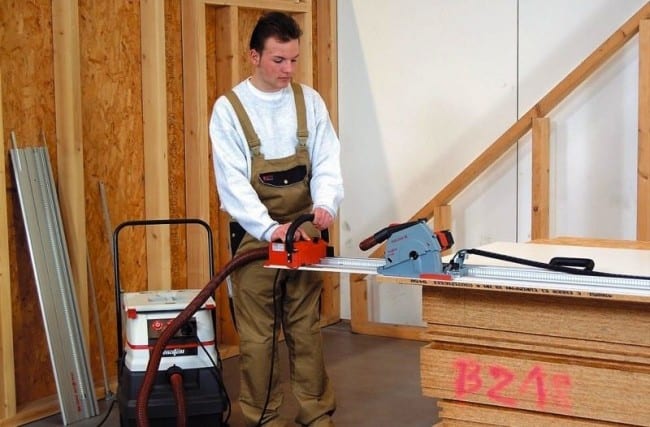 I don’t know if we’ll ever see this automatic track saw in the US market, but after checking it out today I think every carpenter and panel cutter in the industry should at least be interested in seeing some domestic distribution.