DeWalt has some pretty powerful impact drivers and wrenches, but their new DW059HK-2 18V XRP NiCd Impact Wrench with Hog Ring Anvil is nearly twice as strong as their existing DeWalt DC821KA 1/2″ Impact Wrench. The DW059HK-2 was designed from the ground up as a brand new tool that could hold up to (and thrive in) extremely high-torque applications. We’re talking the stuff undertaken by real pros, be they mechanics, contractors, plumbers, or maintenance professionals. The wrench can also be purchased as a standalone tool (model number DW059HB) for those who don’t need a battery or charger.

So just how much torque does the new DeWalt DW059HK-2 18V XRP Impact Wrench have? A full 300 ft-lbs. of maximum torque. That’s 3600 in-lbs! It also puts out 2,600 impacts per minute (IMP) and 1,650 revolutions per minute (RPM). The DeWalt DW059HK-2 is a nice addition for those already heavily vested into the NiCd line of 18V tools from DeWalt. It’s an extremely powerful product that’s going to come in very handy for those who need serious torque. 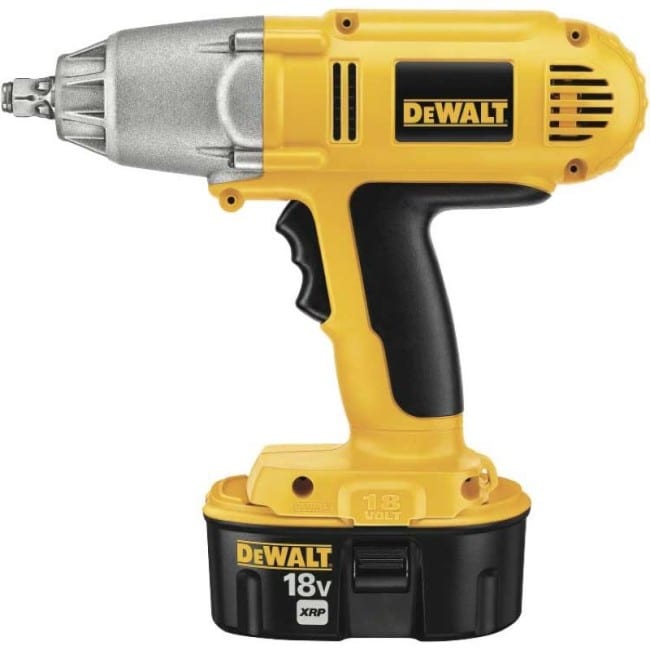 The tool uses the popular hog ring anvil, so socket changes are quick and easy, and they hold fast when you’re doing the work. In terms of durability, DeWalt equipped the DW059HK-2 with a magnesium gear case and an all-metal transmission. Physically, the tool is also easy to grip and use thanks to the comfortable rubber overmold placed on the handle. A forward/reverse rocker-style switch makes it quick and easy to change directions without having to shift your hands or reach for a switch.

The new 18V Impact Wrench kit (DW059HK-2) comes with a 1-hour charger, two 18V XRP NiCd batteries, and a blow mold case. It should retail for around $299, while the tool-only version retails for $159. As we noted above, this is quite the deal if you’ve already got a fleet of NiCd batteries in your arsenal.

The Impact Wrench comes with the company’s 3-year limited warranty as well as a 1-year service contract and 90-day money-back guarantee.