For anyone who does any sort of automotive work, the impact wrench is a must-have tool. Even if you only occasionally remove a tire, there is a stark difference between using a breaker bar or tire iron and a pneumatic impact wrench. But with a standard impact wrench, you also have the obligatory air compressor, hose, and necessary room to make sure it all works. Not so, with Kobalt Tools’ new 18V 1/2″ Cordless Impact Wrench. Of course, the real issue is, now that they’ve severed the cord and gone to the 18V Lithium-ion battery, is the tool sufficiently powerful to truly take off lug nuts? Can it replace, for real, not just for “most purposes” the air powered impact wrench? That’s what we set out to prove or disprove. And like most experiments, we had a lot of fun, and learned more than we expected.

When you first pick up the Kobalt 18V Li-ion cordless impact wrench, you’re going to immediately realize this is a hefty tool. It’s larger in both physical size and weight than its pneumatic counterpart. We took a photo of the Kobalt 18V Wrench alongside our Chicago Pneumatic 7750 Turbo 1/2″ Drive Air Impact Wrench. What first surprised us, later became a bit more reasonable once we figured that this one tool’s size is offset by its portability and the convenience of not having to drag out a hose and hook up an air compressor. 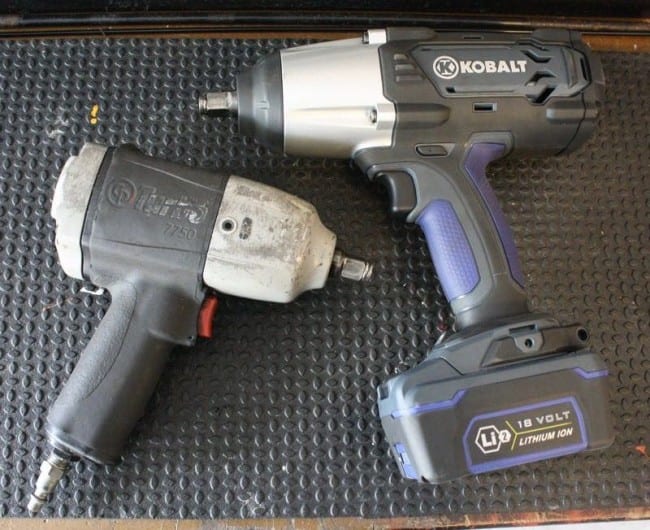 It’s bigger and heavier, but is also far less hassle to use

The tool itself has the back end of a Kobalt 18V Li-ion Drill/Driver, and the front end of a full size impact wrench. As with our former review of the Kobalt Tools 20V 4-piece Combo Kit, this tool also uses the same 30 minute battery charger and comes with two Extended-run Lithium-ion 3.0Ah batteries. 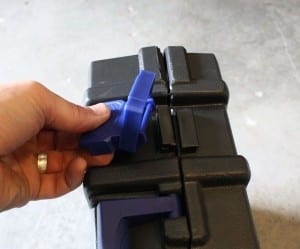 The Kobalt 18V Li-ion cordless impact wrench comes with a blow mold case that fits the tool, batteries and charger perfectly, but drops the ball on the latches, which are completely inadequate for long-term use. They actually fall off and do not positivity hold the case closed. Given the durability of the tool, it’s kind of like a bad paint job on a really cool car – it dings the experience slightly. We’d love to see Kobalt Tools use a metal latch with some kind of pinned hinge in the near future. The reason we’re even being picky on this is that, by design, this Cordless Impact Wrench is made for portability. That means you’re going to keep it in a truck tool box or grab it and go in some other fashion. It deserves a case that’s going to stand up. 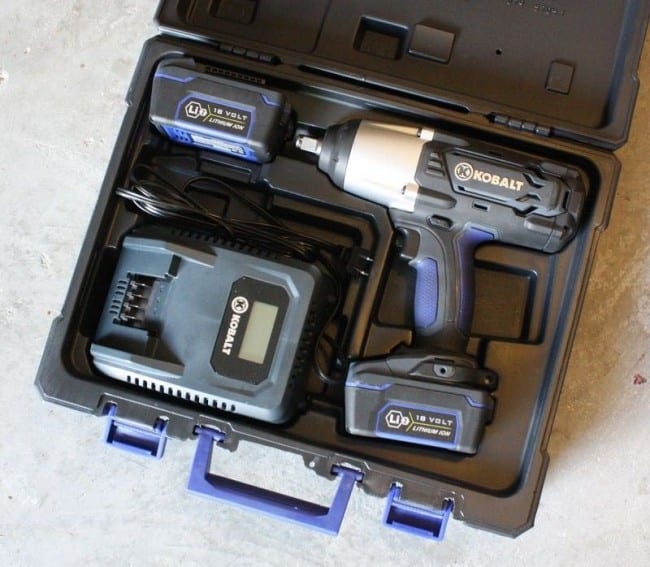 First off, the battery life on the Kobalt 18V Li-ion cordless impact wrench has been surprisingly good. We figured that with a hi-torque tool like this, battery changes would have occurred much more often. To date, we have rotated the tires on three different vehicles and have done break jobs on two others using this impact wrench and we are still on the first charge of the very first battery. That’s more than impressive, it’s unbelievable. 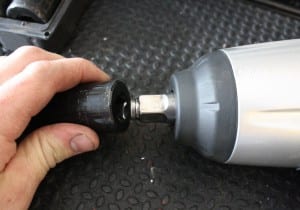 Sockets go on and off this Kobalt Tools Impact Wrench with ease and loved the full 1/2″ drive size of the tool. The available torque has been also been more than adequate to take the lug nuts off of every car and truck we’ve tried it on. We figured that it was a given we might need a breaker bar every now and then, but this Kobalt Impact Wrench has busted even some of the toughest nuts loose on its own and without breaking a sweat. In fact, the tool operates exactly like a cordless drill. Forward and Reverse switches are positioned in the same locations you’d expect. The trigger is also variable speed, but we found that we tended to always use it “full-on”.

One thing we did note was that there was no delay for the LED light. We would think that when working on cars, you never have enough light when and where you need it. Having an impromptu flash light built into the Impact Wrench would have been quite handy. With this tool, as soon as you touch the trigger, the motor starts running. Let go, and the light goes right out. In future models we’d love to see a 10 second delay or other similar solution. 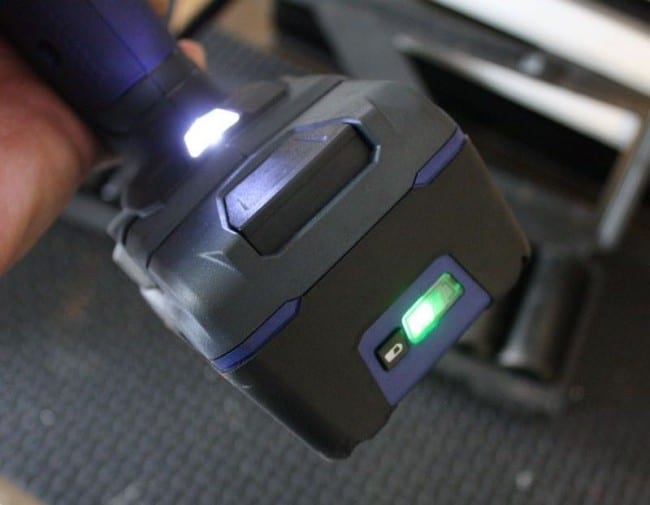 Like the other Kobalt Lithium-ion tools, the Cordless Impact Wrench charger features a digital 30 minute countdown to let you know when the battery is charged and ready for use. What continues to be perplexing, however, is that it seems to take exactly 30 minutes to charge a battery, no matter if it’s 3/4 full, half-full, or completely dead. We put a battery on whose battery level gauge indicated that it was about 1/2 charged. It started its 30 minute countdown. After 5 minutes we removed the battery from the charger and the battery level indicator showed that it was fully charged. Just for fun, we stuck it back on the charger and it again started a 30 minute countdown. Again, the timer is neat – but expect roughly a full 30 minute charge for any battery you stick on it.

We used the Kobalt 18V Li-ion cordless impact wrench like it was going out of style. And you know what? We discovered that it’s one of those tools that everyone perks up when you’re using it around them. They can’t help but stare at you as you pop lug nuts off their truck with the 18V Cordless Impact Wrench. It’s not natural… or maybe it’s not yet perceived as natural. The good news is that, based on our use of the tool so far, we’d have to say that it offers great bang for the buck and makes flat tire changes and brake jobs a breeze. In fact, on the next long road trip I take, I am going to make sure to throw it in the trunk! At $269 you really should have one of these kits in your garage or truck box. It’s only too bad they don’t offer it in a tool-only version (yet) for those of you who already have some Kobalt Li-ion Cordless 18V tools in your arsenal.