If you need a powerful and handy ratchet and don't want to deal with an air hose, then the Milwaukee M12 1/4-inch ratchet is your tool!

The concept of a socket for turning rods, bolts, or fasteners has existed since the middle ages. But the tool we’d recognize as a ratchet today didn’t exist until J.J. Richardson invented it in the 1860s. Since that time heads and sockets have become hexagonal, but the indexed ratchet has remained quite similar to its original design. Pneumatic and battery-powered tools have taken away the manual work of turning, but the need for a tool that tightens and loosens fasteners and bolts is still ubiquitous in the garage. Mr. Richardson could have never imagined the Milwaukee M12 1/4-Inch Ratchet, but today it’s a natural extension of Milwaukee’s typically excellent tools and impressive battery technology. I always have a lot of car service work to do, and I hoped that the Milwaukee ratchet was up to the task.

The beauty of this tool is in its mobility. There’s no cord and—more typical in a garage—there’s no air hose to attach. It’s small and light, so it can certainly fit in the tighter spots so common on newer cars.

The Milwaukee’s 12-volt motor with 30 ft-lbs of torque would almost certainly up to the tasks I needed it for. Its variable speed psuedo-paddle switch trigger with 250 RPMs also looked like it would make my job easier. There’s a little concern about accidental trigger engagement, but a lock out switch during transportation and storage prevents it.

Other notable features include the lithium-ion battery’s on-board fuel gauge and LED work light. The features were very promising, and I was just hoping the ratchet would keep its promises.

Editor’s Note: The Milwaukee M12 1/4-Inch Ratchet is really a simple design based around the idea of a powered ratchet, so you see many similarities. Switching between tighten and loosen is the same and it can even be used like a traditional ratchet if you want to feather the last turn. The brilliance of Milwaukee’s design with the M12 is that they produced a very relevant tool without over-engineering the hand tool it replaces. 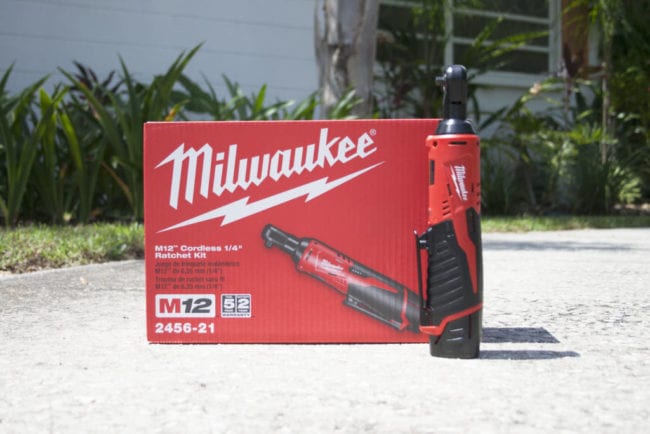 Long gone are the days when an automotive mechanic specializes in just one system. I work mostly on automatic transmissions, but over the last 30 years I’ve learned to take on anything I can to understand the system as a whole. That means that I had the opportunity to use the Milwaukee M12 1/4-Inch Ratchet all over the vehicles I serviced.

The first thing I used it on was a blower motor underneath the dash. Usually I’ll grab my 1/4-inch air ratchet, but it occurred to me that with the Milwaukee, the customer didn’t have to even drive in the shop—the battery power allows me to be mobile. It was awesome that I didn’t have to deal with an air hose and I liked it right off the bat. 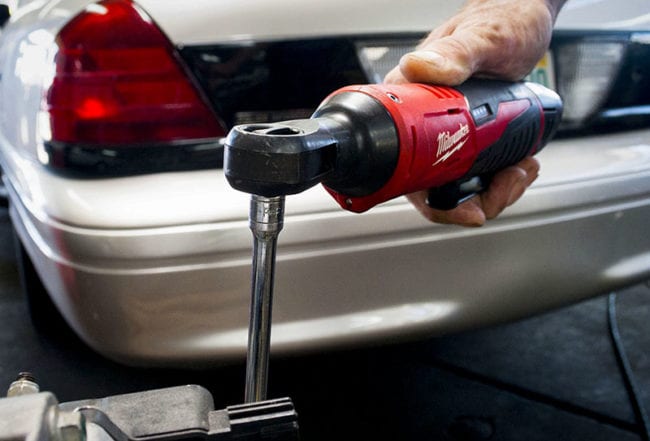 Among the other tasks I completed with the ratchet was coil removal and replacement, interior panel removal and replacement, and band clamp removal. I worked on an Ecoboost turbo car that has some very tight spaces. There was an 8mm clamp buried deep in the workspace, but with the Milwaukee I was able to reach it easily, spin off the clamp, and tighten it back up when I was done.

Today’s cars have some delicate parts made from plastic and rubber. If you use a 3/8-inch air ratchet or even a corded tool of some kind, you can easily break a fastener or strip it out. Around those parts, you can use the M12 without power like a traditional ratchet for the last couple turns if you’re worried about over-torquing them.

Should you need all the power the M12 can muster, it will stop, flash, and let you know that it won’t go any tighter when it gives its full 30 ft-lbs. 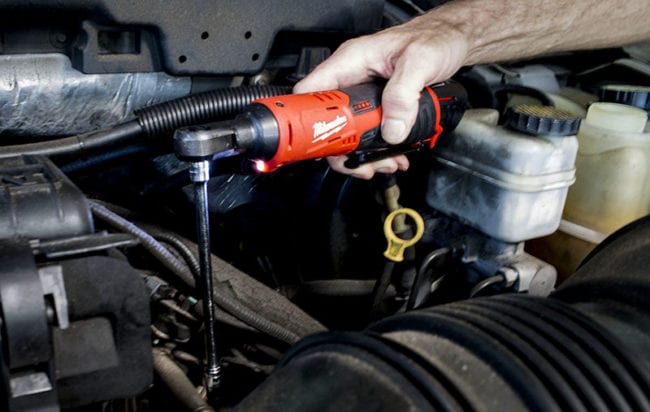 This ratchet allowed me to work faster. It certainly works quickly on its own, but it speeds up the process in other tangible ways. You’re no longer tethered to the air hose. You don’t need to move the hose around, and you don’t begin working only to forget the air isn’t on.

The tool is comfortable to hold, and the trigger is in a good position. I haven’t had any problems bumping the trigger and causing false starts. All the controls are in the right place. If you’re used to any sort of pneumatic ratchet where you take away the hose, this has the same feel. It’s light, so you can work with it for long periods of time. The LED worklight is also excellent—something my air ratchet doesn’t have. 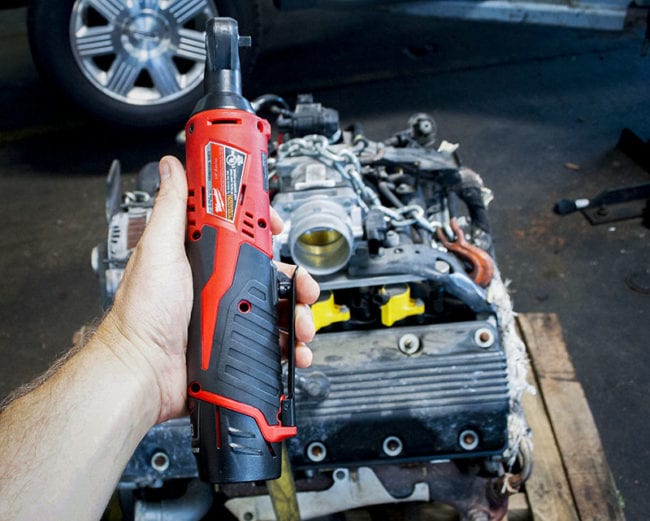 Battery Life is Worth a Mention

I have to emphasize the remarkable battery life. I have used this every day for over three weeks, and I haven’t charged it! In fact, I still have two of the four bars shown on the battery gauge. It’s really the icing on the cake for this tool.

Pro Tip:
There’s a finesse or feel when tightening things. Some guys will say, “tight is tight,” but you can overdo it. Know the specs and limits of the thread and nut or bolt. If it’s one of the delicate parts I mentioned, the Milwaukee exceeds the limits still. 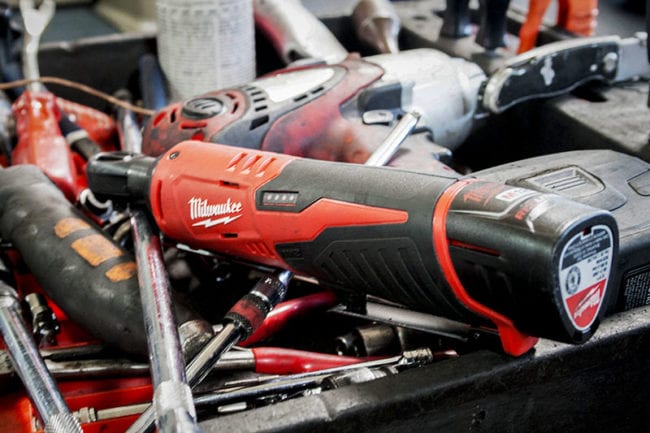 The shop is a rough environment for tools but fortunately I haven’t dropped the ratchet. I’m sure it would stand up to the test. But it’s been on the ground, in the cart and toolbox with other tools, and it’s held up just fine.

For work in the auto shop, I can’t think of anything I’d like to improve on the Milwaukee M12 1/4-Inch Ratchet. The portability, the power, the battery life, the battery gauge, and the worklight make it easily one of my favorite tools. I highly recommend this tool to other professionals. $109 bare tool (2456-20) and $159 for the kit (2456-21) for such a powerful and convenient battery operated tool is money well spent.