The KECO paintless dent repair kit comes packed with quality components, so you don't have to worry about putting your own kit together piece by piece.

The price of vehicles seem to consistently increase, as does the price for repair and service. Paint and bodywork have seen huge increases as well, aided by environmental and safety standards. Anytime you forego having to use the bodyshop, it’s much easier on your wallet.  The KECO Paintless Dent Repair Kit is here to save pros time and keep many out of the bodyshop.

Paintless Dent Repair (PDR) is gaining more traction, professionals are increasing in number, and tool technology is getting better. PDR is removing dings, dents and creases in body panels without the need for body filler and paint. KECO is leading the charge for making better tools for the PDR pros.

In writing this, my mind steps back to my childhood and what things could’ve been. The year is nineteen-eighty-something, and I’m in the height of my little-league career. I mean, I’m probably  hurling balls at a blistering 43…47 mph.  I’m throwing in my front yard with the best catcher in the world at that time, my buddy Aaron. Did I mention that behind Aaron about 10 feet is a pristine ’66 Chevy II Super Sport?! I should also mention said car was owned by my Father. The count is 0-2 (0 balls and 2 strikes) on the batter. This is our imaginary game anyway, and the next pitch, I am coming with the heat.  Aaron, the world’s best catcher, calls for the fastball to be high and outside. The pitch needs to be something unreachable by the batter (the imaginary one).

I wind-up, reach back, and start my move to the mound with my best Nolan Ryan fury. The pitch is definitely high, maybe a little too high.  The world’s best catcher wasn’t the world’s tallest catcher or even just tall.  The pitch sails over his glove by a good 10 inches but hit the quarter-panel of the ’66 Super Sport dead-center. It is no accident that professionals of all trades drive pickup trucks, and we are no different here at Shop Tool Reviews.  Our 2012 Chevy Silverado is our ultimate workhorse and has the miles to prove it.  With those miles have come dents and dings. In particular, recently the Chevy found a steel post filled with concrete.  This mishap put a sizable dent and crease in the back of the cab and front of the bed.

Being the hands-on crew that we are and having the network of pros that we do; we started researching the best PDR kits. Our research pointed us to KECO tabs which allow the professional to remove dents with hot glue and plastic tabs. In particular we received the PDR K-Bar Deluxe Body Repair Kit which included many tools and many different types of tabs. One tab in particular that seemed to fit the bill for our needs was the Centipede tab. The Centipede tab is just as it sounds, it’s long and can contort and bend in multiple areas.  Once glued to the subject vehicle, the pulling tool of choice is used to pull from multiple locations on the Centipede tab.

The new K-Beam bridge lifter is the newest edition in the line of KECO PDR products. This allows the technician to pull dents slowly and with the utmost control of the pull. The four adjustable wide rubber feet allow the user to brace the tool in the most structural area, so the pull of the dent does not create more damage by the tool.

For smaller dent pulls and cleaning up around the larger dents, KECO has created the Robo Lifter which was included in our kit as well. As the cousin of the K-Beam, the Robo Lifter shares the same wide rubber feet.  The rubber feet rotate 30 degrees for precise alignment and the base rotates a full 360 degrees.  The knob at the top allows the technician to give quick height adjustment in response to the depth of the dent and size of the tab being used. 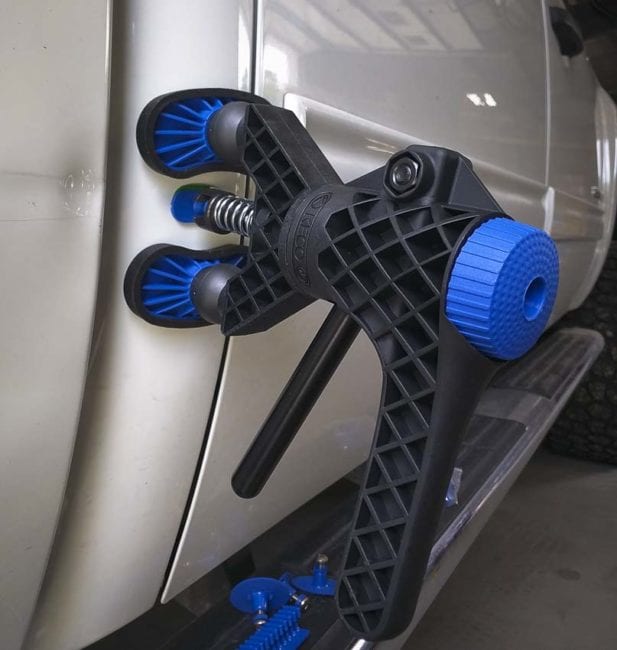 Also included in the kit was the K-bar, a slide hammer, scores of tabs big and small,  glue sticks of various colors, professional glue gun, knockdown kits, and a nifty heavy duty bag to carry it all in. This kit is an awesome start to someone who wants to jump into the PDR profession and is not sure what to buy.  This kit can also be a great way to expand your toolkit while keeping what you have. As I mentioned, our Chevy Duramax gets a workout and rarely sits idle, so before starting we needed to at least knock off the dirt. It’s obvious that we didn’t do a whole wash job. Rather we just spritzed with some soapy water and wiped it off. Now it was time for the magic.  This was a pretty nasty dent that was months old, which had a crease down the center.

First up was using one of the KECO glue tabs with the slide hammer to pull the bottom edge of the dent out.  Pulling from the center would most likely have caused another crease.  One pull from the slide hammer did the trick, so now was the time for the big dog to work. We covered the centipede tab in green glue slime and stuck it to the center of the crease.  The length of the tab was nearly the same length of the crease, so it worked out very nice. The K-beam was centered over the centipede tab and the feet were placed several feet apart from one another.  Just a few turns of the knob confirmed the strength of this tool and tab. The dent was decreasing in depth with each twist of the knob. After several turns, it was obvious the pull began to turn the dent into a positive, hence creating a high spot. The pull was stopped at this point and alcohol used to remove the centipede tab.

More glue tabs and the Robo Lifter was used a few more times to pull a few smaller areas. There is a small ding in the corner of the cab that wouldn’t pull, and it seems to be a very rigid area.  There is also a ding left in the very front edge of the bed which is rigid as well. The few imperfections that are left can be cleaned up with a PDR rod and a knockdown tool.  We will cover this in another segment.

The KECO Paintless Dent Repair Kit provides all the tools needed to pull a multitude of dents in any configuration.  The K-beam gives the technician pulling power, yet stability and control of the pull. The Robo Lifter offers great stability with the wide rubber feet and makes quick work of pulling small areas. The other tools in the kit, such as the K-bar, knockdown tools and the hundreds of tabs are made of great quality and increases the value of the kit. We were impressed with the ease of use of the tools and performance of each pull. While a glue-tab kit should not be the only tools in the PDR technician’s arsenal, it seems like it would be very hard to be successful without one.  The KECO PDR Kit is everything in a bag, so it makes it simple to purchase. I’m sure we’ll find more flaws in the sheetmetal of our friends’ and family’s vehicles, so stay tuned.  You can purchase the KECO Paintless Dent Repair Kit here.