If you’ve been following along for the past year as we’ve built and enhanced our PTR shop, then you know we installed typical 4 ft. T8 fluorescent lights throughout as part of our steel building electrical conduit & lighting project. While those lights served us well, making a change to LED was a simple decision that was made easier by the availability of lighting solutions like the Go Green LED T8 Retrofit bulbs.

After a while, we had enough of the fickle ballasts associated with fluorescent bulbs. While the theoretical life expectancy on fluorescents are decent, the real world results are often not as impressive It seemed that no sooner had we installed the last bulb that we were already replacing them. And while we didn’t have to replace any of the ballasts, I’m confident that anyone reading this has walked down a dimly lit hall or had to carry a flashlight in a warehouse to read a SKU. If you’ve had this great experience, it was most likely the result of ballasts that had exceeded their useful life. Fluorescent lighting systems are unstable and don’t last—hence the entry of handy fluorescent lighting testers to the market to help make routine replacement easier.

While surfing the ol’ interwebs one day and researching some LED lighting options, Go Green LED International stood out in the crowd by providing LED T8 retrofit options that were almost dummy-proof (that’s not a corporate guarantee, just an honest perception by this PTR reviewer). After a quick conversation with an engineer at Go Green LED, we determined the best option for us was the 18W 5000K 4 ft LED tube. This is a $21 LED bulb that directly replaces a 4′ 32W T8 fluorescent—not a bad trade-out considering you may never have to replace it again (unless you run your shop 24 hours a day—then you’re up for renewal in roughly 5-6 years). 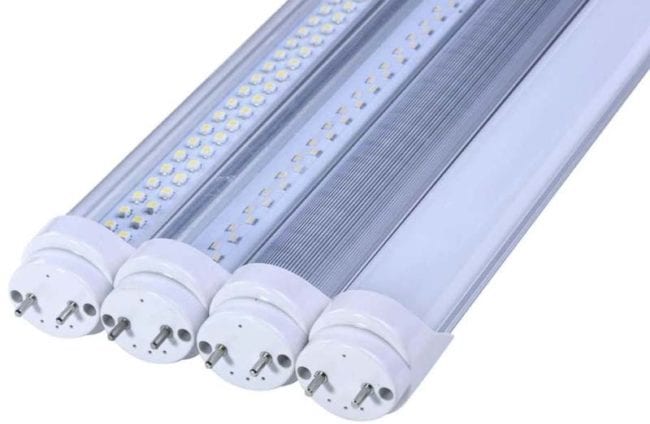 There are several styles of LED T8 bulb to choose from, including various color temperatures and dispersion characteristics.

This is where some of you may be jumping ahead and thinking that 5000K is too much and that the light color is going to look blue. Well, let me educate you as Michael Viggiani, CEO of Go Green International, educated me. The “blue” color tone in many LED bulbs/lights is not due to it being a true 5000K—it’s actually because they run cheap drivers and hardware to support the LED strips. The Go Green LED “Cool White” 5000K bulbs are actually very much like the natural sunlight that we’re all used to. It’s a more accurate “daylight” white (“daylight” white is measured at 5600K for anyone who’s interested).

I was very impressed when I saw the packaging in which the Go Green LED T8 Retrofit bulbs were shipped. We all know that any lights or lighting fixtures shipped through our favorite parcel services “require” an extra drop-to-the-floor, kick off the truck, or use as a pseudo baseball bat for hitting other errant boxes thrown in the warehouse. The boxes and packaging that the Go Green T8 LED tubes were shipped in held up to the test. 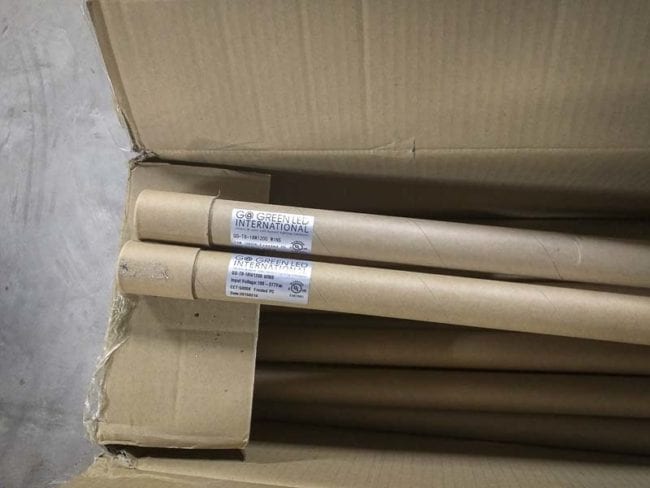 Each LED tube is packaged in its own cardboard tube.  When removed, the Go Green LED T8 replacement bulb is half aluminum housing and heatsink and half plastic lens/cover.  They are definitely not heavy, but at the same time they feel like a very solidly constructed product—a very quality piece of engineering. 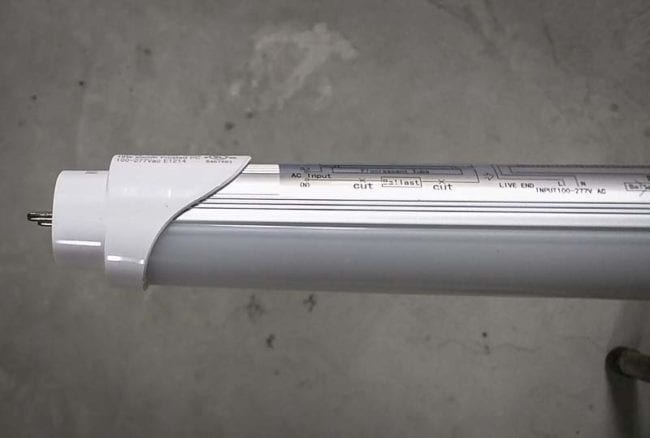 Once we laid some good eyes on the new Go Green LED T8 Retrofit bulbs, we had to get started asap. First to go were those gas-filled dumpster bombs. I’m sure that none of our audience has participated in watching the explosion of fluorescent bulbs when the thin glass somehow gives way (actually, this is not a recommended activity by Pro Tool Reviews—fluorescent bulbs contain some pretty dangerous metals, such as lead, cadmium and mercury.) Aside from the other hassles of fluorescent bulbs, the chemicals are not something you want to be breathing or even touching if and when they shatter. 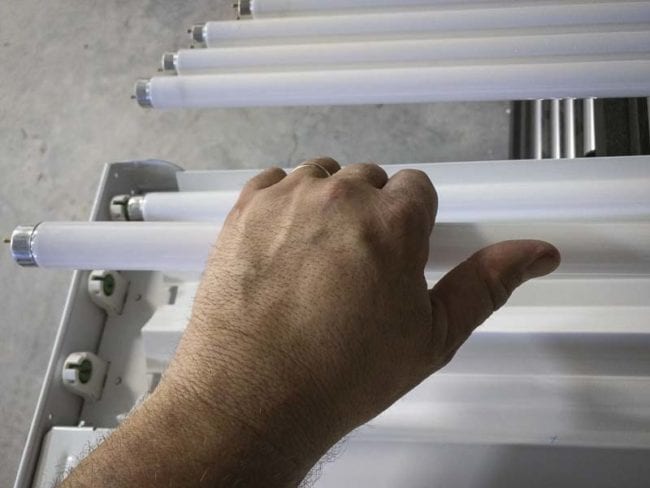 After we removed all the old fluorescent T8 bulbs, the next step was to remove the ballasts. You simply don’t need these when switching to LED, so there’s no reason to keep them in there. To do this we just removed the cover of the T8 fixture, did a quick quarter-turn of the latch, and then cut the wire leads going to the ballast. Our recommendation is to cut the wire as close to the ballast as possible, so you leave as much wire to work with as possible. Once the wires were cut we removed the screw(s) for the ballast and disposed of it appropriately.

The process of converting a T8 fixture from shunted to non-shunted isn’t all that hard, but it’s best if you can start with a non-shunted product to begin with.

The typical fluorescent bulb has a common going to one side of the bulb and neutral going to the other.  Both poles on each end are the same—both are neutral or both are common.  For these LED retrofits, only one end needs power, so the other end is only for keeping the bulb in the socket. On the business-end or power end of the retrofit, one pole is common and the other is neutral. Rewiring the sockets is as easy as a couple wire nuts, when you’re dealing with a typical commercial T8 sockets.

Are Your T8 Sockets Shunted or Non-Shunted? 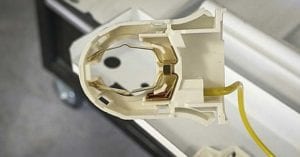 Creating a T8 non-shunted socket by clipping the jumper and reassembling.

In the case where you may have price-shopped your way into the cheapest T8 lighting fixture, then you may have a little more work in order to convert your T8 fluorescents to use LED bulbs. The question is: Do you have shunted or non-shunted sockets? Non-shunted is what you want. If you have shunted sockets, then you will need to make them non-shunted (so there is no power going between contacts), or you will need to buy new non-shunted sockets.  This is still an easy fix, either way you go, but it requires a little more time. If you get confused you can replace “shunted” with “shorted” to help you remember what you’re after. A shunted socket has both terminals connected together on one end, essentially making both pins common or neutral. This is what you need to defeat in order to use an LED T8 replacement bulb.

I Saw the Light

Once the sockets were wired appropriately, so that the two contacts on one end had common on one side and neutral on the other, the rest was easy. We just placed the cover back on the fixture, and then we installed the new Go Green LED T8 Retrofit bulbs. You want to make sure that you mark the end of the T8 fixture that has power, as the other end is nothing more than a holder for that end of the bulb. The most new T8 LED retrofits will only require (and accept) power on one end.

It wasn’t long before we flipped the switch and watched our new Go Green LED T8 Retrofit bulbs glow. The newfound light from the LEDs was amazing. They draw roughly half the power and produce more light. If you’re into saving energy—and who isn’t—LED is the way to go. We talked about the color difference between our fluorescent bulbs and the Cool White 5000K Go Green T8 LEDs above, but below is a visual idea of what it looks like in the shop (Go Green LEDs are on the left and our original fluorescent bulbs are on the right). Whites are much more “white” with less of a yellow tone—this also makes the shop appear brighter and better lit as well. 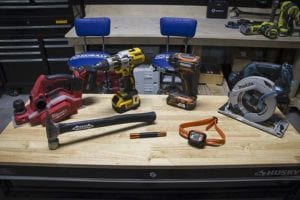 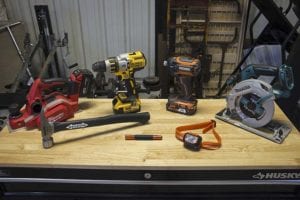 Another noticeable difference was that the LEDs created less heat than the fluorescent counterpart—very important if you run a shop in Florida or anywhere there’s extreme cold or heat. We used a FLIR thermal imaging camera to measure the heat off the bulbs after they were installed. We measured in the morning and also got up close so as to distinguish the bulb heat from the heat of the roof. The result was that the Go Green LED T8 Retrofit bulbs came in around 16 degrees F cooler. With these bulbs, there’s a lot of surface area to dissipate what heat is generated by the LED chips. In addition, the lifespan of these bulbs is 50,000 hours. Good luck outliving these things. 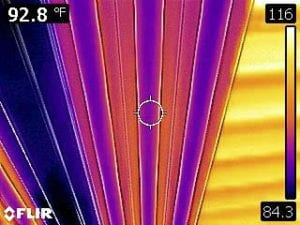 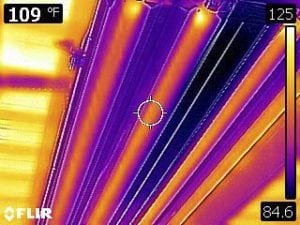 With a lifespan of 50,000 hours, savings of 50-70% in efficiency, cooler run-temps, no harmful gases and metals, and a 5-year warranty, upgrading to Go Green LED T8 Retrofit bulbs is a compelling choice that will ultimately save you a lot of hassle and even some money. This was really a fun and quick job to retrofit these light fixtures, and anyone with general electrical knowledge (turn off the breaker) could easily pull this off. You can learn more about Go Green International’s line of T8 replacement bulbs here.

Good article and I didn’t have a problem following your walk through but I think you might have a different definition of what a ‘common’ wire is than I do.

Robert,
Great article but it brought up a question that’s maybe apples and oranges.
From the Platt Electric website:
The Philips Lighting F32T8/TL850/ALTO is rated at 2,850 Lumens. (just a random example).
Go Green lists the LED T8 Retrofit at 1,600 lumens yet the shop looks brighter. Any idea why?