Down in sleepy Nürtingen, the forward-thinking, German branch of Metabo has been hard at work structuring a cordless battery partnership that should provide the template for brand synergy that will likely kick off the dawn of a new era in cordless tool freedom and convenience.  They’ve recently announced their partnership with eight, count them, eight other cordless power tool manufacturers. Their partnership, known as the Cordless Alliance System (CAS), represents the first of its kind among power tools, true leadership in the marketplace, and an example for other manufacturers to follow.

The Who’s Who Of The Cordless Alliance System

But what heroes of the tool market make up this Cordless Alliance System, and what is this allegiance’s purpose? Under the new CAS, nine manufacturers of similar company size will team up to share the same battery and charger platform. Eisenblatter, Eibenstock, Haaga, Starmix, Collomix, Steinel, Mafell, and Rothenberger have all jumped into this allegiance. You probably haven’t heard all of these names before, but they’re, like, big overseas, probably. 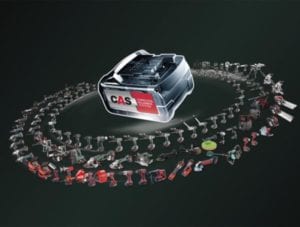 Now, users who have bought into any of these nine brands will be able to use Metabo’s 18V Lithium-Ion High-Density Batteries with their CAS tools. It’s not quite as awesome as showing the world truth, justice, and the American way. But, according to Metabo, “this [alliance] proves that Metabo is the most innovative and forward-thinking tool manufacturer in the industry today,” which is also pretty cool, I guess.

How did these titans of industry come to this arrangement? Dr. Christian Heine, Managing Director at Rothenberger, gives us one answer:

“Due to the developments in the past years, Metabo has conquered the technological leadership and currently offers the most powerful system in the industry.”

This partnership should provide users more overall freedom and flexibility, as the CAS provides a broader range of tools. Additionally, this partnership should save the end-user some money as well. Currently, the Cordless Alliance System includes over 110 power tools, and Horst Garbrecht, President of Metabo, expects the CAS to continue to grow:

“With Lithium-Ion High-Density Battery (LiHD) we have enough power for the most energy-intensive applications, allowing us to build any hand-held power tool in a cordless version in such a way it meets the professional user’s requirements of power and endurance.”

Sure, some of Metabo’s press release quotes sound delusionally pompous, especially in the American market. But, to give credit where it’s due, the idea to join up with other smaller brands has some merit. Perhaps the Cordless Alliance System can bring about Metabo’s vision of both a cordless construction site and metalworking shop, all run on the same battery platform. If the idea takes off in Germany, there’s little doubt that more manufacturers in the American market will follow suit.

How Long Do Lithium-Ion Batteries Last?

This is what I’ve been wanting from DeWalt/Porter Cable for years. Once DeWalt switched to the slide packs and PC switched to 20V Max they should have taken the step. Maybe the new Craftsman will work with one or the other (not likely).

Not likely at all. Craftsman has now launched, and even though some of the tools look like PC, they’re not compatible with batteries. This would be nice, but not happening.

I had this idea many years ago because one manufacturer may offer a hammer drill that a person wants but they prefer an impact driver from a second manufacturer. Then there’s the circular saw from yet a third manufacturer and an angle grinder from a fourth. Buying into multiple battery platforms is not in the cards, so you have to settle on one, maybe two manufacturers for your hand held power tools. Not being in the tool manufacturing business, it was always just a “what if they did this” idea in my head. Besides, if I had been able to… Read more »

We agree this makes a lot of sense for the consumer/end-user. You can purchase the tools you need, regardless of the brand (assuming they’re one of the 8 listed), and power them with one line of batteries. Of course, Metabo is pushing this, and they’re manufacturing the batteries. We doubt the US tool companies will follow this model when there’s money to be made in selling batteries – or new tool kits.

This website uses cookies to improve your experience while you navigate through the website. Out of these cookies, the cookies that are categorized as necessary are stored on your browser as they are essential for the working of basic functionalities of the website. We also use third-party cookies that help us analyze and understand how you use this website. These cookies will be stored in your browser only with your consent. You also have the option to opt-out of these cookies. But opting out of some of these cookies may have an effect on your browsing experience.
Necessary Always Enabled
Necessary cookies are absolutely essential for the website to function properly. This category only includes cookies that ensures basic functionalities and security features of the website. These cookies do not store any personal information.
Non-necessary
Any cookies that may not be particularly necessary for the website to function and is used specifically to collect user personal data via analytics, ads, other embedded contents are termed as non-necessary cookies. It is mandatory to procure user consent prior to running these cookies on your website.
SAVE & ACCEPT
wpDiscuz
4
0
Would love your thoughts, please comment.x
()
x
| Reply