Having a trim router at arm's reach can be a big help, or even need, on many jobs. Even better when the router is cordless, such as this RYOBI cordless P601 trim router, which is powered from the 18V RYOBI ONE+ system.

Get It at Home Depot

Routers are heavy-duty work horses with an enormous amount of power behind that rotating bit.  When I received the RYOBI cordless trim router I wondered, “Can this battery-operated 18V palm router really get the job done?”  If the job entails cutting dados, grooves, and simple finishing edges, this little router will more than satisfy your needs.

What’s in the Box

The box contains the bare RYOBI cordless trim router (no battery) and a collet wrench.  It has a clear square sub-base, with an LED light at the bottom to illuminate your cuts.  This trim router is set up for an edge guide, which is sold separately.  With the cost of the router coming in at $69 from Home Depot, spending an extra $20 for an edge guide would be worth the money.

Along with this cordless trim router, I received a charger and an 18V high-capacity lithium ion battery.  If you’re like me, you probably already own other tools from Ryobi’s ONE+ line. When one battery dies, swap it out for the one ready and waiting on the charger and get back to your project immediately.

The “GRIPZONE” advertised on the box is a rubberized area underneath the battery.  I found it useless, since I had optimum balance control while gripping the router around the base.  This really isn’t a problem so much as an odd design choice. The RYOBI P601 router has one speed that operates at 29,000 PM without a load. Adjusting the depth of the cut is rudimentary, and you do this using a quick-release lever which then allows the base to slide up and down or even off the router completely. I found the micro-depth adjustment knob to be good for slightly raising or lowering the bit by eye-balling it. The tiny ticks, however, presented too much wiggle in the knob for true accuracy. The micro-adjustment knob also vibrates back and forth when using the router.

I tested the RYOBI cordless trim router using three bits: two straight edge bits (1/4 in. and 1/2 in.), and a round-over bit.  Using these bits on both pine and walnut gave me a better idea of how the router would work on a variety of wood densities.

I had plenty of power to cut clean dados and grooves in both pine and walnut. The round-over edge worked nicely on the pine. Cutting across the edge of the grain with the round-over bit on the walnut proved to be the most difficult, since I had trouble avoiding burn marks. This happened no matter how quickly I pushed the router along the edge. This being a fixed-speed router, I wasn’t able to change the rotation speed to help alleviate the problem.  Power, the bit’s rotational speed, and the feed rate work hand-in-hand. When you can’t control one of the three, you need to compensate.

RYOBI boasts that this trim router is able to cut up to 600 linear feet in one charge. After cutting several long dados, the battery power dropped by two bars, and I was nowhere near the 600 ft mark. They likely used a round-over bit to make this claim, since I made several passes with one, and it didn’t seem to take much out of the battery life. 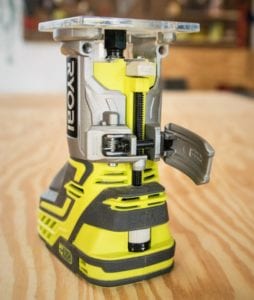 Changing the bits is fairly straightforward and simple. Flip the RYOBI cordless trim router over, and it sits on a flat surface, providing easy access to the collet and bit. Since it doesn’t have a cord to unplug, I highly recommend removing the battery completely while swapping or removing bits.  Either way, you’ll have a flat top to rest it on. Depress the spindle-lock while using the collet wrench provided to either tighten or loosen the collet nut. I found the spindle-lock was difficult to press in all the way, but with one thumb pressing the spindle-lock and the other hand using the collet wrench to wiggle the collet nut, this problem was fixed every time.

All in all, this little router is a winner.  If my project calls for a few dados or some edges rounded off, I’m coming for this guy and sparing myself the trouble of getting out my hulk of a full-sized router.

Before making your own purchase, check ryobitools.com for current online specials.  While writing this review, I found great deals on their high-capacity batteries, which were over half off.

How To Use A Router: Training The Apprentice