Craftsman has experienced a lot of changes recently. Recently purchased by Stanley Black and Decker, the brand has launched new cordless lines of tools and has worked out deals that allow Lowe’s to be their major retail partner. One of the core tools on the cordless side is the Craftsman V20 Hammer Drill. 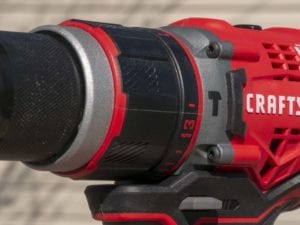 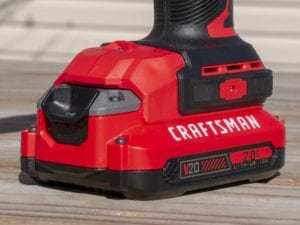 From a feature set standpoint, the Craftsman V20 Hammer Drill checks off most boxes that even Pros look for. At this stage, I don’t have any major complaints about the form and function of the design.

The only thing it’s really lacking is an auxiliary handle. There’s enough torque in low to warrant one, but it’s not in the kit.

How Does It Perform?

The Craftsman V20 Hammer Drill can crank out 2,100 RPM (no load). In hammer drill mode, it can maintain 35,700 BPM. Both of those figures are solidly Pro-level. 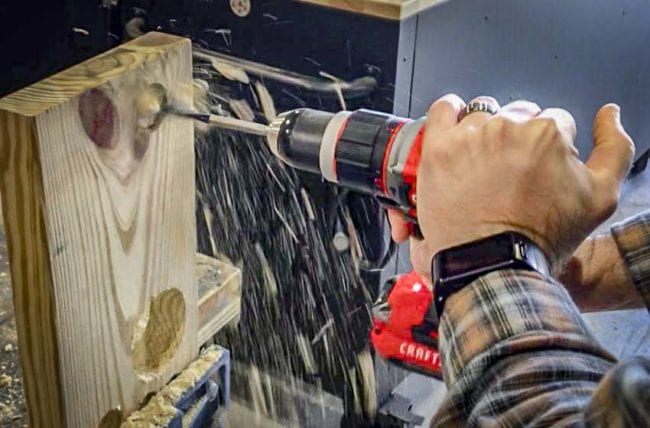 Coming up with a meaningful torque rating proves to be a challenge for any brand flying under the Stanley Black & Decker banner since they stick with their Unit Watts Out value. Looking at the UWO and torque values we know, Craftsman is going to produce between 560 and 570 in-lbs of torque.

The torque level is in the range we expect for Pro-level compact hammer drills or Prosumer/DIY models. It limits the diameter of hole you can drill, but you’re still going to be able to use virtually any twist bit along with spade bits, augers, and hole saws to an extent.

As long as you stick with Craftsman’s recommended range, this is a fast drill. We’re particularly impressed with how well it tackles hammer drilling in concrete using Bosch’s MultiPurpose bits. 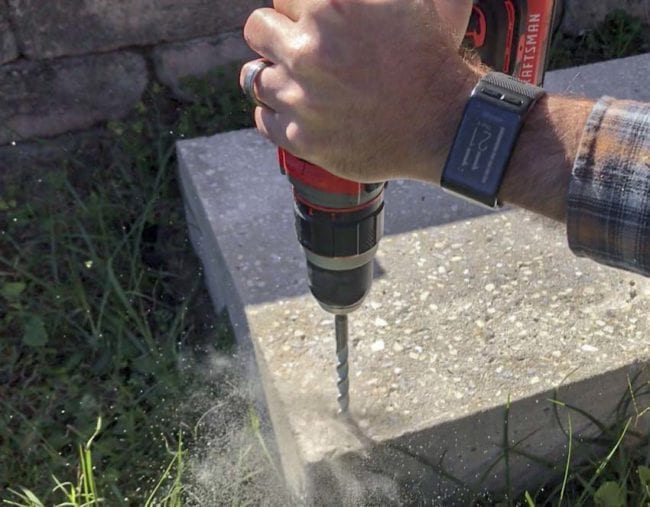 We were able to work with our Daredevil spade bits and hole saws to a larger diameter than the specs show, but you’ll need to drop into low gear to do it. With hole saws especially, there’s enough power that you’ll want to keep a solid grip since there’s no auxiliary handle. Our recommendation is to avoid going larger than recommended because of that.

Lowe’s sells the Craftsman V20 Hammer Drill as both a kit and as a bare tool. Kitted with two 2.0Ah batteries and a charger, it retails for $179. As a bare tool, you can grab it for $119. It also comes with Craftsman’s 3-year limited warranty.

That pricing is a bit high for compared to Prosumer and DIY models yet less than Pro-level compact hammer drills. That’s an interesting place to position Craftsman.

With no real heavy-duty hammer drill to give you a higher top end, that makes the line more appealing to the serious DIY crowd than Pros when it comes to committing to a single battery platform.

Check out what the Pro Tool Reviews Team Says

There’s a lot of DeWalt/Porter-Cable DNA in the design of this drill and that’s a good thing for Craftsman. It’s a capable model for the work you expect from a Pro-level compact hammer drill, but without a heavy-duty model to cover the jobs that require more power. If all of that fits what you need, this is an excellent mid-range hammer drill.

Shop Organization How To Build a Funnel Stand Video