The new trend in sockets, which Kobalt has fully embraced with its 27-pc Xtreme Access Socket Set, is the universal SAE/Metric spline drive that fits 6 & 12 pt, spline, star, square and even most rounded sockets. But Kobalt also utilized a new 4-in-1 solution that has the ratchet surrounding the socket, leaving the center open. Why is that important? With the center open , your bolt can pass right through, letting you use the same socket for both shallow and deep applications. Combined with the specialized drive system, the Kobalt 27-Piece Xtreme Access Socket Set covers nearly all the bases for most general socket use. While we reviewed the “special edition” of this tool kit, Kobalt also has their Xtreme Access system available as a 14-piece 3/8″ drive kit; 16-piece 1/4″ drive kit; 49-piece 1/4″, 3/8″ and 1/2″ drive kit; and also as a 10-piece 3/8″ drive socket set and 11-piece 1/4″ drive socket set. 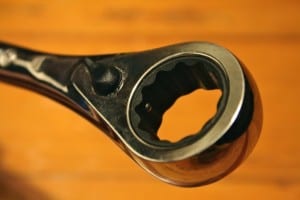 The first thing we noticed about the new Special Edition Kobalt 27-piece Xtreme Access Socket Set was that it held to the new, smoother, design that Kobalt introduced last year. This was in direct response to mechanics who, quite frankly, felt that the sharp edges of their previous models were almost sharp enough to shave with. Instead, the new ratchet is perfectly smooth to the tough and the business end looks like a heavy-duty ratcheting wrench. Now that bad news – while the Special Edition is smooth, the rest of the Xtreme Access tools utilize a blue/gray rubber-coated handle. Some will like this for ergonomic reasons, while others won’t. We actually prefer the smooth steel, particularly given the dirty, oily nature of auto work. Regardless of which ratchets you use, the sockets are all pass-through, which is to say that they will allow bolts of various sizes to pass through the center of the socket. As the sockets get smaller, so does the pass-through diameter, however. This is more or less a necessary physical constraint, but one that gave us some difficulties in our testing.

The Kobalt sockets utilize a spline drive which truly works with 6-point and 12-point bolts, spline bolts, star bolts, square bolts and even bolts that are somewhat rounded. I liked the “snappy” feel of the sockets as they attached to the ratchet. It’s secure and you don’t get the impression that it will fall out during use. There is a tony bit of wobble, or play, in the socket due to the nature of how it inserts and how the single ball bearing secures it in place. It’s actually a bit less than the typical wobble found in traditional 3/8″ socket connections since it’s distributed around a wider circumference. And that brings up another good point. Since the ratchet grabs the socket around the outside and not the inside, the increased surface area gives the tool the feel of being a lot tougher. The sockets also fit into the ratchet, which gives the tool more clearance when you’re trying to get into a cramped space. 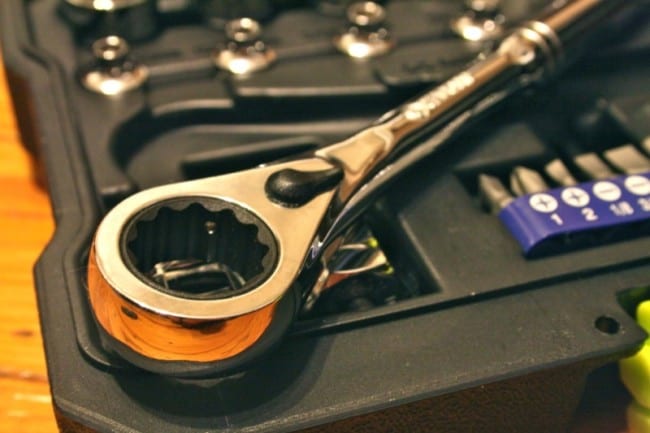 The ratchet has 72 teeth with a super-tight 5 degree arc so you can really crank a bolt or nut on or off with very little clearance. It’ll drive you crazy, but we’ve been there and it’s a nice feature to have. There are a few degrees of play in the mechanism before it catches the first tooth, but once it does it’s all business from there on out. The Special Edition 27-piece kit is actually quite robust and includes 14 SAE/metric combination sockets plus a set of 1/4″ bits. It also has some of the necessary adapters to make the Kobalt 27-piece Xtreme Access Socket Set “play nice” with your legacy products. Chief of these are the 3/8″ socket adapter, which lets you use a traditional ratchet with the sockets contained in this kit, and the inverse 3/8″ adapter which lets you use this kit’s ratchet with any other socket set. 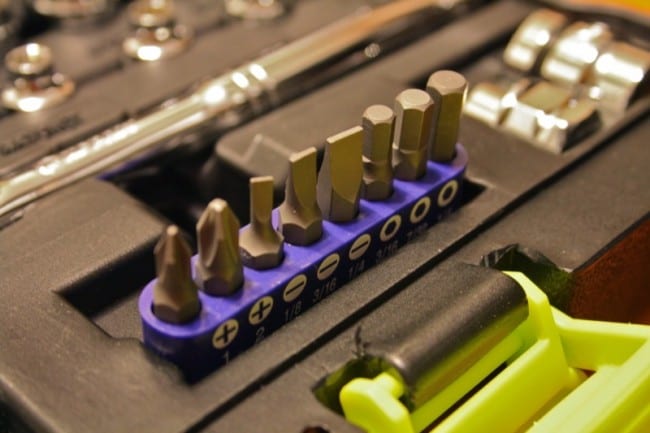 The Kobalt 27-piece Xtreme Access Socket Set, rather than redefine all of the terms, seems to refers to its larger sockets as 3/8″ and its smaller sockets as 1/4″. The kit splits its 14 sockets into the two sizes and there are 5 internal diameters across this set of sockets which determines the largest size of bolt you’re likely to get through the middle during use. There is also an adapter so that the included 3/8″ Xtreme ratchet can also use the smaller-sized sockets. Even with the adapter, the ratchet grabbed the sockets tightly with very little play. 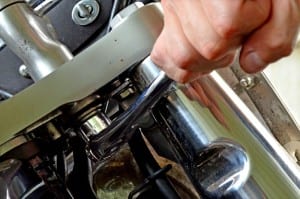 As it turns out, the Kobalt Xtreme Access Socket Set delivers on its promises. We initially looked around for several places where a more shallow socket system would really come in handy. Adjusting the handle bars on a 2002 Suzuki Volusia 800 gave us what we needed. With the low clearance afforded by the brake and fuel lines, having a socket that fit within the center of the ratchet served us very well. And it wasn’t just the clearance, either. The extra low grip provided by the wrap-around design of the ratchet meant we could really rank on the tool to free up our bolt and cause the bars to shift freely. Given the amount of tug we placed on the the bar and the socket, this is one tough set of tools that holds it own, even against many higher-priced alternatives we’ve utilized in the past.

We also needed to adjust an alternator in a 2003 Jeep Liberty and were impressed that the rather large bolt went right through the middle of our socket as the oversized nut was securely wrenched free by the Kobalt ratchet. At the same time, the 72-tooth ratcheting mechanism kept us able to loosen the bolt, even though we didn’t have a lot of room in which to to maneuver. 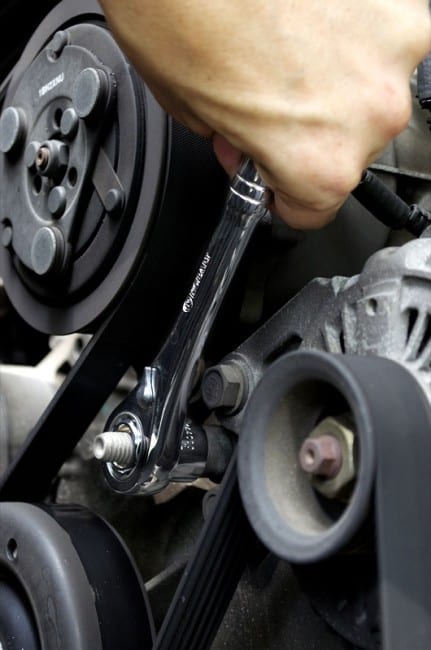 With some smaller nuts, we found difficulty in getting the bolts to go through the ratchet opening, perhaps because the ratios tended to get tighter at small sizes. We also had one overall gripe: the case. If not opened properly, the sockets will go flying all over. Also, it uses plastic latches that seem to last about a week and then self-destruct. If you grab a magnetic socket holder you can ditch the case and be fine, but it bears mentioning for those who might want to have a more portable kit. 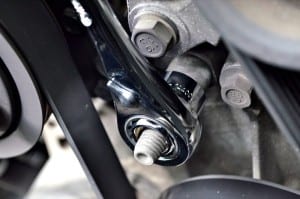 There is no question that you get some significant advances in this type of tool. The additional clearance alone is compelling, as is the greater leverage – or at least the appearance of such – when you torque on the outside of the sockets, closer to the bolt head or nut.  What you shouldn’t forget, however, is that smaller socket sizes aren’t likely to come through in the promise of eliminating the need for deep sockets. As the socket size decreases, so does the pass-through whole. Still, for larger SAE and MM sizes we were impressed by the way this tool works. Kobalt seems to be ramping up its arsenal of automotive tools lately. We were blown away by the battery life on the Kobalt 18V Lithium-ion Impact Wrench, and now the manual Kobalt Xtreme Access wrenches are getting some of the limelight. With the lifetime warranty (which we’ve taken advantage of on some of Kobalt’s older tools) and their ready availability in Lowe’s, it’s hard not to recommend these tools, even over our normal go-to brand, Craftsman – a company that seems to be struggling to maintain both its identity with Sears and its hold on the DIY market.

Seems like this will be a useful tool, but it sure is difficult to insert and remove the sockets from the spline. Perhaps it’s too new or there is some technique I haven’t uncovered